Lande: The Calais 'Jungle' and Beyond

Lande was the controversial, euphemistic name used by French authorities for the site of the ‘tolerated’ encampment on the eastern margins of Calais. By summer 2016, ten thousand displaced people lived at this place, better known as the
‘Jungle de Calais’, but in October 2016 a ‘humanitarian dismantling operation’ by the French authorities dismantled the camp. Even so, today some two thousand displaced people still live in ‘micro-jungles’ in the Calais landscape, in which cycles
of demolitions and encampments are intensifying.

Lande: The Calais ‘Jungle’ and Beyond is an exhibit at Pitt Rivers Museum and accompanying open access book which reassemble material and visual culture that survives from the ‘Jungle’ as it existed at Calais from March 2015 to the demolitions
of 2016. In reflecting on material, visual and digital culture from the Calais ‘Jungle’, the project helps to reassess how we understand ‘crisis’, activism, and the infrastructure of national borders in refugee and forced migration studies, foregrounding
the politics of environments, time, and the ongoing legacies of empire. Throughout the exhibit and the book, the researchers argue that an anthropological focus on duration, impermanence and traces of the most recent past can help us better understand
and re-centre the ongoing human experiences of displacement in Europe today.

The book, Lande: The Calais 'Jungle' and Beyond by Dan Hicks and Sarah Mallet, and the exhibit at the Pitt Rivers Museum aim to raise cross-disciplinary questions around the material, environmental, temporal and visual dimensions of La Lande
as a place of dehumanising borderwork (‘us’ vs ‘them’), governance and violence on the one hand, and, on the other, as a ‘space of appearance’, a site for collective action and protest. In this respect, the book and the exhibit also represent a contribution
to the prospect of a Visual Archaeology, and towards the possibilities of Activist Archaeologies that engage with a wider cross-cultural moment of visual politics. In doing so, the researchers explore how archaeology can help us understand our contemporary
world.

The book and exhibit developed out of the Architectures of Displacement ESRC-funded project (ES/P005004/1), which ran from November 2016 to July 2019. 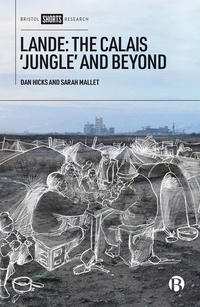 Exhibit: Lande: The Calais 'Jungle' and Beyond – link to exhibit at Pitt Rivers Museum

Book: Lande: The Calais 'Jungle' and Beyond by Dan Hicks and Sarah Mallet (Bristol University Press, 2019)