A 12,000 year story - revealing the history of settlers in Britain from the end of the Ice Age to the present day 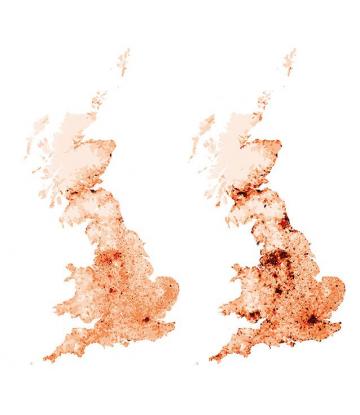 From the arrival of the earliest modern humans over 40,000 years ago to the population of the present day, the story of the people of Britain is one of ongoing movement, migration and settlement. A new exhibition at Oxford University Museum of Natural History asks where we came from, and presents surprising answers through archaeological evidence, genetic analysis, and interactive data.

Opening with a showcase of remains from the oldest known ceremonial burial in Western Europe, the 33,000-year-old 'Red Lady' of Paviland (actually a man), the Settlers exhibition charts the patterns of migration that have shaped Britain since the islands became continuously inhabited at the end of the last Ice Age, around 12,000 years ago.

"The movement of people across international borders is the subject of much social and political debate across the world, and in Britain and Europe in particular," says Professor Paul Smith, Director of the Museum of Natural History.

"By taking a long view, and using evidence from the disciplines of genetics, archaeology and geography, our Settlers exhibition presents a unique view of the role of migration in the story of the people or Britain since the end of the last Ice Age. Through this interdisciplinary approach we learn more about a complex subject than if we adopted one point of view alone."

A striking picture of British genetic ancestry is presented through the University of Oxford's People of the British Isles study, which peers back in time to reveal how genetic clusters of people in different areas of Britain share genetic connections to people in areas of continental Europe.

This revealing genetic map of Britain shows that:

Archaeological material shows the geographical and cultural impact of Romans, Vikings, and Anglo-Saxons presence in Britain, while more recent demographic data show us the changing patterns of migration over the past 200 years, as the movements of people are affected by world events and shifting conditions in the UK.

Within Britain, journeys painstakingly recorded from family historan records show the extent to which the Industrial Revolution drew people to the growing major cities during the 18th and 19th centuries. By the 20th century this pattern had started to reverse, as people moved away from large urban centres.

In the 21st century, ongoing movements into, out of, and within Britain continue to affect the population. The percentages of people living in Britain but born outside have increased, and so have the numbers of people born in Britain but who live overseas. In November 2017, the latest UK migration statistics showed a significant shift in net international migration, with immigration down and emigration rising - the first signs of the impact of Brexit Britain?

"In Britain, we only really know how many people have come and gone, migration in or moved out, when ten-yearly Census results are released. It will not be until a couple of years after the 2021 Census that we next reliably know in detail how many people have arrived to stay and how many have left," says Danny Dorling, Halford Mackingder Professor of Geography, at the University of Oxford.

Settlers encourages visitors to add their own family's story of movement through the "Where are you from?" online and in-gallery interactive, and a partnership with the Museum of Oxford brings oral history recordings from its Journets to Oxford exhibition to the Settlers story.

Featuring specimens from the Museum of Natural History collections, digital interactive displays, and drawing on research from the University of Oxford's Medical Sciences Division and Social Sciences Division, Settlers is the latest in the museum's Contemporary Science and Society exhibition series.

"Through displays and events, our Contemporary Science and Society series draws together research from the University of Oxford and material from the museum's collections to explore natural environment topics that impact on society today," adds Professor Paul Smith.