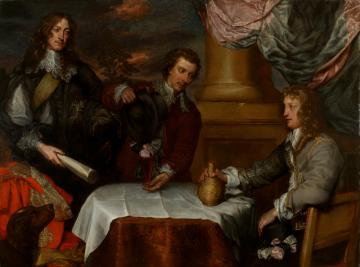 The Ashmolean is delighted to announce the acquisition of a magnificent group portrait by William Dobson (1611–46) painted in Oxford during the Civil War.

The painting has been allocated to the Ashmolean on the occasion of the 400th anniversary of the birth of the founder of the Museum, Elias Ashmole.

It has been acquired for the nation through the Acceptance in Lieu scheme, administered by the Arts Council. A £90,900 grant from the Heritage Lottery Fund (HLF) will support a programme of events and activities to bring the picture to a wide public audience.

The painting, commissioned by John Russell in the winter of 1645–6, is a unique artefact of the English Civil War. It shows a meeting between three Royalist commanders who were then based in Oxford, home to the royal court in exile. The group in the painting are Prince Rupert (the King’s nephew), Colonel William Legge (Governor of Oxford) and Colonel John Russell (commander of the prince’s elite Blue Coats).

The portrait evokes a range of connections to Oxford’s history. Prince Rupert (on the left), had lodgings in St John’s College where the sittings for the portrait might have taken place. At the same time, in 1645, Elias Ashmole had accepted the post of gentleman of the ordnance at the Oxford garrison, and the intellectual interests that drove his foundation of the Ashmolean in 1683 were stimulated by Ashmole’s close associations with Royalists at the Oxford court.

This group portrait was painted at a moment when hopes of a Royalist victory were fading. Prince Rupert had just suffered an ignominious defeat at Bristol, the main port in Royalist hands. Once the dashing hero of the Cavalier cause, after Bristol Rupert was relieved of his command by the King and ordered to leave the country. His only recourse to clear his name of wrong-doing was to face a court martial.

On the right sits Colonel John Russell, commander of the prince’s elite Blue Coats. Russell was made famous for his ‘last stand’ at the Battle of Naseby where his regiment fell almost to a man. Though wounded, Russell escaped and joined Rupert at Bristol. He was among the colonels who attended the Prince’s council of war and signed a statement defending Rupert’s decision to surrender the city.

The identity of the central figure is not wholly resolved. Traditionally thought to be William Murray on account of an 18th-century commentator, the sitter is more likely to be William Legge who became Governor of Oxford in 1645. He was at the heart of the group of trusted soldiers Rupert gathered around him and who formed his personal staff. Legge was also central to Rupert’s reconciliation with the King, organizing the conversation between Charles and Rupert which led to the Prince’s return to Oxford in December 1645.

The painting is filled with symbols and references to the recent discord between the King and his nephew and to Rupert’s enduring loyalty. The scroll which Rupert holds in his right hand may refer to the blank sheet which Charles had sent to him on which to compose his confession. Instead, being innocent, Rupert asked Legge to return the letter empty, which greatly moved the King and resulted in a pardon. Rupert has also discarded his scarlet cloak which he was recorded as wearing when he rode out of Bristol following his surrender.

Beside the cloak is a dog wearing a collar with the initials ‘P.R.’ The dog is a motif traditionally associated with faithfulness and may, in this painting, be intended to stand for Boye, Rupert’s famed white poodle who rode into battle with the Prince and was killed in 1644 at Marston Moor. To Parliamentarian pamphleteers Boye was a ‘devil dog’ credited with supernatural powers, such as being weapon-proof and able to catch bullets with his teeth. Among Royalists, Boye was also immensely popular and as ‘Sergeant-Major-General Boy’, he became the army’s mascot. There is also, in the painting, hints of revenge likely to be directed towards George Digby, 2nd Earl of Bristol, who led the faction against Rupert and tried to convince the King that his nephew was a traitor. The central figure dips his cockade in the glass of wine which evokes biblical episodes where clothing stained with wine symbolized vengeance.

The portrait is the first work by William Dobson to enter an Oxford collection. Superbly painted with rich colouring and close attention to detail, it is both a rare and ambitious work by Dobson whose extraordinary talents have only recently been recognized.

Arguably the greatest native-born painter between Hilliard and Hogarth, Dobson succeeded Van Dyck as the leading portraitist at the court of Charles I. His time in Oxford came at the peak of his short career (he died unexpectedly in London in October 1646).