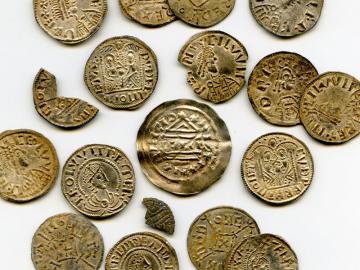 The Ashmolean Museum has succeeded in raising the £1.35 million needed to purchase King Alfred's coins. More than 700 members of the public contributed to the appeal to find the locally discovered treasure a permanent home, and save it from private collection.

Lead support was provided by the National Lottery through a Heritage Lottery Fund (HLF) grant of £1.05 million. The grant will be used towards the acquisition of the hoard, as well as conservation, display, touring and educational programmes. Thanks to a further £150,000 from the Art Fund, and contributions from private individuals and the Friends and Patrons of the Ashmolean, the museum reached its fundraising target within days of the deadline.

Dating from the end of the 870s, the Watlington Hoard contains over 200 Anglo-Saxon coins, including many examples of previously rare coins of Alfred the Great, King of Wessex (871-899) and his less well-known contemporary, King Ceolwulf II of Mercia (874-899). These coins provide new evidence of the relationship between the two kings, and can potentially shed light on how the once-great kingdom of Mercia came to be absorbed into the emerging kingdom of England by Alfred and his successors.

Dr Xa Sturgis, Director of the Ashmolean Museum says: 'The Watlington Hoard is one of the most exciting and important acquisitions we have ever made, particularly significant because it was found in Oxfordshire. To be able to keep the hoard in the county and put it on display with the Ashmolean’s Anglo-Saxon collections, which include the world-famous Alfred Jewel, was an opportunity we could not miss.'

Once formally acquired, the museum will launch an events and education programme for the hoard. This will begin on 11 February when the treasures will be put on display at the Oxfordshire Museum, Woodstock.