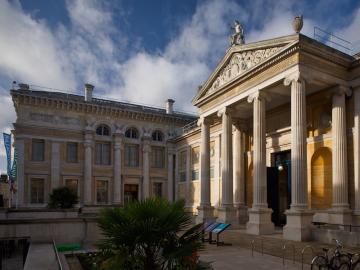 The Ashmolean Museum has completed its Catalyst Endowment Challenge, having received extraordinary levels of support to exceed its target of £1million.

The Ashmolean was one of 31 arts and heritage organisations to successfully bid for a matched funding grant from the Heritage Lottery Fund, and was awarded £1million in 2013. The grant was made as part of the HLF's Catalyst: Endowment scheme, designed to kick start endowment fundraising within the cultural and heritage sector by offering vital matched funding.

The Catalyst grant has enabled the Ashmolean, Britain's first public museum, to reinvigorate its campaign to build a significant endowment. The endowment will help to secure the Museum's future in the long term by providing a sustainable source of funding.
More immediately, funds raised through the Catalyst campaign will support on-going public engagement work, including events, educational activities, exhibitions and displays.

Building on the success of the Catalyst campaign, the Museum continues to fundraise for its endowment through the Ashmolean Fund, which aims to raise £25million by 2020.

An exceptional seven-figure match funding pledge made by an anonymous benefactor will help to support this ambitious aim in the coming years, by doubling donations to the Ashmolean up to the value of £5million.