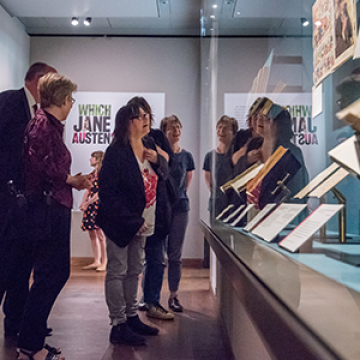 Smith, a celebrated author, playwright and scholar, joined donors and special guests, including author Philip Pullman, at the Bodleian's Weston Library for the official opening of the exhibition, which runs until 29 October.

Which Jane Austen? aims to challenge the public's perception of one of England's greatest literary heroes. The exhibition presents Austen as a risk-taking businesswoman and a wartime writer who was informed and inspired by the international adventures of her family members. Through a spectacular selection of Austen materials displayed together for the first time, the exhibition delves into the many influences on this great writer's work. The Bodleian Libraries houses one of the three most significant collections of Austen materials in the world.

Addressing those gathered at the opening event, Smith said: 'I am honoured to have been invited to open this exhibition, and to be here to celebrate above all Jane Austen's merry, merciful, merciless, versatile eye, to celebrate…her unparalleled understanding of the human need for and love not just of narrative, but its structural workings and fulfilments.'

Smith later went on to describe how Austen took 'the novel form to a next step so natural and effortless-seeming and so ahead of itself that novelists will always be beholden to her and are still racing to keep up with her.'

Smith, who is well known for her innovative writing style, is the author of more than a dozen novels and short story collections, including the award-winning novel How To Be Both (2014), a book of two halves that can be read in any order, and her latest work, Autumn (2016), praised by critics as 'the first great Brexit novel.'
Curator of the Bodleian's exhibition Kathryn Sutherland, speaking on BBC Radio 4's Woman's Hour last week, compared Smith to Austen, saying 'I think in many ways she has a comparable reputation now to Jane Austen's in her own time.'

Sutherland, Professor of Bibliography and Textual Criticism at the University of Oxford, is a world-leading Austen expert. She is editor of the exhibition's accompanying publication, Jane Austen: Writer in the World, published by Bodleian Library Publishing. For more information, visit the Shop website.