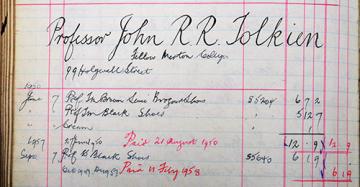 The Bodleian Libraries has purchased the historic customer ledgers of venerable Oxford shoemaker, Ducker & Son, a unique piece of history which provides a glimpse into the lives of the shop's famous clients such as Lord of the Rings author JRR Tolkien and Brideshead Revisited novelist Evelyn Waugh. A small selection of the ledgers will be on public display at the Weston Library from 25-26 March, 2017.

For over a hundred years, "Duckers" traded from its well-known shop on Oxford's Turl Street from 1898 until it closed in late 2016. The contents of the 11 leather-bound volumes detail the purchases of the shop's illustrious clients over the last century and provide insights into the social and commercial history of the early 20th century. Over the years, customers have included members of European aristocracy, several Maharajahs as well as generations of Oxford academics and students.

The volumes acquired by the Bodleian cover the period from 1910-58 and feature beautiful copperplate writing detailing the names, addresses and personal style of thousands of customers, both 'town and gown'. The detail in the ledgers extends beyond financial transactions; they also include newspaper clippings about high-profile customers that staff have pasted onto clients' individual pages.

Duckers, home of the Oxford brogue, was one of very few traditional hand-sewn, bespoke shoemakers outside the West End of London. Many visitors to the shop may remember the collection of red leather-bound ledgers that were displayed on shelves at the back of the shop. The store closed in December 2016 after the directors Bob and Isobel Avery decided to retire and apparently were unable to find someone to take on the business.

The Libraries purchased the Duckers ledgers at auction in February, thanks to funding provided by the Friends of the Bodleian. The ledgers were seen as a valuable addition to the Libraries collections given their connection with the history of the University and many prominent literary figures whose papers are already held at the Bodleian. The Libraries holds the largest collection of original Tolkien manuscripts and drawings in the world and is currently supporting OUP in its production of the first ever complete works of Evelyn Waugh, by providing access to important editions of his books.

'We are delighted that we have been able to save this fascinating piece of Oxford history and to keep the Duckers ledgers in the city where they have been for more than a century,' said Dr Chris Fletcher, Keeper of Special Collections at the Bodleian Libraries. 'Clothes make the man, as someone once said, and people will have fun looking at the buying habits of some familiar names, as well as taking a serious look into a sustained historical record of social and business history in Oxford.'

One entry reveals JRR Tolkien's purchase of black rugby boots for 14s 6d in 1913, when he was a student at Exeter College, Oxford. Two pages of entries for Evelyn Waugh suggest that he was a loyal customer, buying approximately 20 pairs of shoes or boots between 1930 and 1946. Another notable entry includes a pair of lambswool slippers purchased by former Prime Minister HH Asquith, whose papers the Bodleian holds, in the final years of his political career. Entries related to Duckers' female customers include boot repairs commissioned by Lady Ottoline Morrell, the English aristocrat who was an influential patron of the arts and the lover of philosopher and writer Aldous Huxley.

In recent years, Duckers has featured in several Ian McEwan novels and a pair of Duckers' brogues were worn by actor Benedict Cumberbatch in the film adaptation of McEwan's novel Atonement. Recent patrons have included comedian Rowan Atkinson, former Top Gear presenter Jeremy Clarkson and Formula One boss Eddie Jordan - although their records are not included in the historic ledgers acquired by the Bodleian.