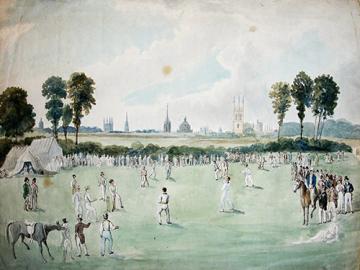 The Bodleian Libraries is marking the 100th anniversary of the death of Oxfordshire collector and folklorist Percy Manning (1870-1917) with a special display at the Weston Library from 18 February to 23 April.

Although not widely known, Manning amassed enormous collections on the history of Oxfordshire and its residents, which are now valuable resources held at the Bodleian Libraries, the Ashmolean Museum and the Pitt Rivers Museum.

Percy Manning: the man who collected Oxfordshire is a small free display for visitors to learn more about this extraordinary collector and his diverse interests, which ranged from archaeology and local architecture to cricket and Morris dancing. The display features prints, drawings, photographs, sketches, plans, brass rubbings and documentary material on the people and places of the county ranging from the halls of academia to rural communities.

'Percy Manning was very interested in collecting disappearing ways of life and customs, and objects that were going out of use,' said curator of the display, Michael Heaney, a former staff member of the Bodleian Libraries. 'He pursued this kind of "rescue archaeology" before it became popular and his collections provide unique insights into social history and everyday life. Manning collected items from more than 400 localities in the county; I doubt there's a community in Oxfordshire not represented in his collections.'

Percy Manning grew up in Yorkshire and Watford then came up to Oxord in 1888 to study at New College. In the 1890s - while still a student - he began to collect extensively by conducting archaeological fieldwork, gathering oral histories and purchasing books, prints and manuscripts. He went on to spend his entire adult life in Oxford as an antiquarian and folklorist and began giving his artefacts and documents to the University of Oxford's collections. After his death in 1917, the remainder of his collections were bequeathed to the University and were distributed between the Bodleian Library, Ashmolean Museum and the Pitt Rivers Museum.

The Bodleian Libraries hold the historical records, plans and drawings that Manning collected as well as his own primary research and documentary sources for Oxfordshire life and history, including sports and pastimes, customs and beliefs.

The man who collected Oxfordshire display

Highlights of the display at the Weston Library include details of the changing landscape of Victorian Oxford. These include an image from a proposal to add a spire to the city's well-known Carfax tower and the floorplan of The Angel Inn, a pub on the High Street that was demolished to make way for the University's Examination Schools. Also on display are newspaper clippings, photos and documents that reveal the history of Morris dancing and traditional folk plays called Mummers' plays. In addition to his collecting activities, Manning revived the Headington Quarry Morris Dancers and equipped them to stage a concert in 1899. They went onto perform in front of Cecil Sharp, an event which paved the way for the English folk music revival. Heaney is restaging this concert at a special event with the Headington Quarry Morris Dancers and folk group Magpie Lane at St Andrew's Church in Oxford on 24 March.

The Bodleian display will be accompanied by a lunchtime lecture at the Weston Library on 22 March. Curator Michael Heaney's talk is entitled What happened to the extraordinary collections of Percy Manning?

In addition to the display at the Bodleian, there are a variety of displays and events taking place across Oxford for the public to learn more about Manning's achievements and legacy. The Pitt Rivers Museum is hosting a display titled Oxfordshire Folklore and Customs: Celebrating the centenary of antiquarian and folklorist Percy Manning from 20 February-8 May. The display will be accompanied by a special visitor trail highlighting other Manning objects on display in the Museum. At The Museum of Oxford, there will be a display titled Mummers, Maypoles and Milkmaids: A journey through the ritual year from 4 March-22 April. The Ashmolean Museum is hosting a display in summer 2017 titled Percy Manning: The keen field antiquary.

Heaney has also edited a new book entitled Percy Manning: the man who collected Oxfordshire, published in February 2017 by Archaeopress.