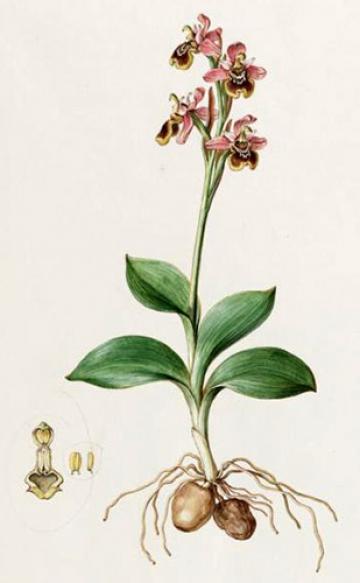 Some of the finest botanical and zoological paintings in the world are going on display at the Weston Library.

Painting by numbers, a new display running from 29 April to 9 July, brings together beautiful watercolours and field sketches by the celebrated central European botanical artist, Ferdinand Bauer (1760-1826), including incredible paintings of marine animals which have never been displayed before. The display focuses on Bauer's ground-breaking two-year expedition to the eastern Mediterranean with John Sibthorp (1758-96), Sherardian Professor of Botany at Oxford, and the current research by the Bodleian Libraries Heritage Science team to unravel Bauer's painting by numbers system.

The numerical notes on Bauer's botanical sketches indicate that he assigned different colours different numbers, and marked these numbers on his sketches, so when he later turned these into more detailed watercolours, he would know which colour to use where. This enabled him to replicate his sketches of flora and fauna to an amazing degree of accuracy, but researchers are still trying to understand exactly how this worked in practice, and if he used a colour chart that has since been lost, or if he simply had an astonishing colour memory.

The display showcases sketches and watercolours based on Bauer and Sibthorp's journey around Greece and Turkey in 1786-88, where they studied the diversity of plants and wildlife and collected thousands of specimens of flora. Bauer made hundreds of pencil sketches of plants and animals during this trip and then came to Oxford where he spent six years (1788-1794) producing watercolours from these sketches. The results of this expedition were made famous by Sibthorp's ten-volume book Flora Graeca (1806-40), one of the rarest and most expensive botanical books in the world. This book took 54 years to produce and only 25 copies were first printed, but it has come to be an important account of the plants of the eastern Mediterranean.

In addition, visitors can see some spectacular paintings of fish, ink drawings of Athens and Constantinople, as well as examples of colour pigments and a reconstruction of a colour chart Bauer possibly used. The display also includes a detailed watercolour of the snake's head fritillary, Oxfordshire's official flower, by contemporary botanical illustrator Rosemary Wise, using eighteenth-century materials and techniques.

Researchers at the Bodleian are currently undertaking a three year research project, funded by the Leverhulme Trust, to identify Bauer's pigments and compare the results with his original number code in order to better understand his work processes and unravel the colour code in the Flora Graeca. The display is co-curated by Dr Stephen Harris, Druce Curator of Oxford University Herbaria, and Dr Richard Mulholland, Leverhulme Trust Research Fellow at the Bodleian who is working on the project to decode Bauer's colour system.

Harris said: 'Bauer's paintings are among the world's finest natural history illustrations. They are astonishingly accurate, especially when you consider that in some cases he only saw the living plant or animal once and then painted it up to six years later. It's great to be able to show the materials, methods and processes Bauer used to produce these remarkable paintings and show them in the city where they were created. It's estimated that Bauer probably made one painting every 1½ days during his time in Oxford, so he was incredibly efficient as well as skilled. Today we are used to snapping images on our phones, but this display really celebrates the skills of botanical illustrators, whose works had, and continue to have, powerful influences on the world's botanists.'

Most of the original plant specimens collected by Bauer and Sibthorp are now preserved in Oxford University Herbaria, whilst Bauer's original drawings and paintings are held at the Sherardian Library of Plant Taxonomy, part of the Bodleian Libraries. The Oxford University Herbaria has digitized all its images of the plant specimens collected by Sibthorp and Bauer. The University of Oxford hold four sets of the Flora Graeca, two of which are held at the Bodleian Libraries. The Bodleian has made a complete digitized version of one of its sets, along with other unpublished works by Bauer.

A series of three free lunchtime lectures will accompany the display.

The display runs at the Weston Library from 29 April-9 July 2017. A small, accompanying digital display will show the reconstruction of Bauer's materials and techniques by Dr Richard Mulholland and Rosemary Wise, and the scientific analysis of Bayer's materials at the Bodleian. Open Daily. Admission is free.