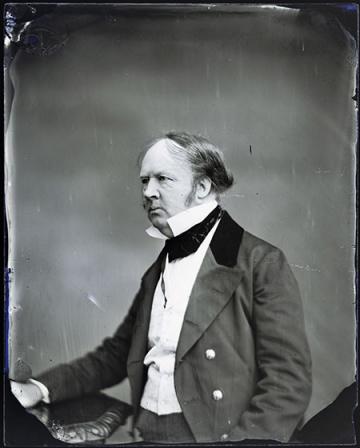 The Bodleian Libraries have launched an innovative web-based resource that brings together the complete works of British photographic pioneer William Henry Fox Talbot, available to the public at foxtalbot.bodleian.ox.ac.uk. For the first time ever, users can discover and search through annotated digitized images of Talbot's photographs gathered from collections around the world. The fascinating images show the emergence and development of photography while capturing moments of early Victorian life.

This comprehensive online Talbot Catalogue Raisonné is an important new resource for scholars, educators, curators, conservators, photographers and historians in many fields, as well as anyone interested in photography. Catalogues raisonné encompass the entire corpus of an artist's work and while they are common in art history, nothing of this scale has been attempted for photography – it is a record of both the invention of an art and of the art of invention.

William Henry Fox Talbot (1800-1877), among the greatest polymaths of the Victorian age, is regarded as the British 'father of photography'. He created some of the first photographs ever made. He also recognised that negatives, with their ability to make multiple prints on paper, would define the central path of photography right through to the digital age. During his career Talbot and his collaborators created more than 4,500 unique or distinct images; approximately 25,000 of his original negatives and multiple prints from them are known to survive worldwide and are held across a range of international institutions and private collections. These are now brought together for the first time in one place – the Talbot Catalogue Raisonné.

'There has been nothing like this before in the history of photography,' said Professor Larry J Schaaf, Project Director for the Talbot Catalogue Raisonné and Visiting Professor of Art at the University of Oxford. 'This catalogue raisonné of Talbot's work will help unlock the enormous artistic, documentary and technical information embodied in these images and allow researchers to find out even more about these works.' Working closely with the Talbot family, Schaaf has been researching Talbot for more than four decades and has examined nearly all of Talbot's originals held in collections worldwide.

Talbot was a scientist who then became an artist. Unlike the case with most of his peers, much of his archive survives; in addition to the 25,000 photographs there are more than 10,000 letters, hundreds of notebooks and many related physical objects. In the early 1980s, before digital projects in the humanities were common, Professor Schaaf developed the pioneering databases of Talbot's work on which the new online catalogue is based.

The Bodleian Libraries have spent the last two years translating these images into a modern online form. The catalogue integrates the holdings of more than 100 international public and private collections including items from the British Library, the National Media Museum, New York's Metropolitan Museum of Art, the J. Paul Getty Museum and the Smithsonian Institution, as well as smaller but significant holdings in Russia, Estonia, South Africa, Canada, France and others worldwide.

Launching with more than 1,000 images, these will be added to weekly until the entire 25,000 negatives and prints known worldwide have been published. They include:

In this new catalogue raisonné, images of prints and negatives are accompanied by notes, annotations and essays, with links to relevant publications and websites. Users can search images by photographer, title, collection, provenance, date, genre, geographic location and keywords then tag, save or compare images and create, annotate and store their own collections or search results, all free of charge. Since many of these primordial images survive in a faded state, they can be enhanced for study onscreen by simple tools that magnify the images and adjust the contrast and density. Negatives lacking a print will be accompanied by a digital positive.

Importantly users can view surviving negatives alongside the prints that were made from them, making this the first online catalogue to make the connection between corresponding Talbot prints/images no matter where in the world the original print is held. This is critical since each negative and print was made by hand and each is unique. For example, users to the site can see an image of a negative held in the Smithsonian alongside salt prints made from it that are held in the J. Paul Getty Museum, the British Library and other private collections.

The images are accompanied by extensive cross-referencing to other sources, such as Talbot's notebooks held in the British Library and the 10,000 Talbot letters available online at foxtalbot.dmu.ac.uk, a project at De Montfort University also directed by Professor Schaaf. In 2014, the Bodleian acquired the personal archive of Talbot, which includes original manuscripts, correspondence, family diaries and scientific instruments. The archive is also rich in physical objects depicted in Talbot's photographs, for example the actual glassware depicted in his famous 'Articles of Glass' published in The Pencil of Nature.

Richard Ovenden, Bodley's Librarian said 'The Talbot Catalogue Raisonné exemplifies the important role of the Bodleian Libraries and cultural institutions in creating digital resources that allow unprecedented virtual access to collections. This project also demonstrates the value of working in partnership, bringing together items now dispersed from across numerous collections. We are extremely grateful to the many institutions who contributed to this exciting new research tool, without whom this project would not have been possible.'

The Talbot Catalogue Raisonné has been developed with the support of the William Talbott Hillman Foundation, The Polonsky Foundation, the Charina Endowment Fund as well as numerous private donors.