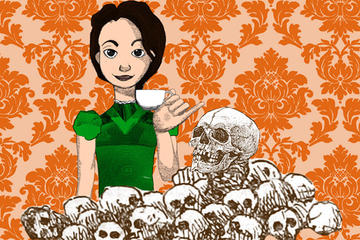 "Glide with us on a murky ride as we journey down the sewer hole into Oxford’s underside – there is much to see in Typhoidland."

A new exhibition about Oxford’s battle to rid the city of typhoid features twin displays at the Bodleian Libraries, the History of Science Museum and the Museum of Oxford in another example of collaborative working across the Gardens, Libraries and Museums.

Alice in Typhoidland tells the story of Oxford’s role in the fight against typhoid, from pioneering efforts to eliminate typhoid in the era of Lewis Carroll’s Alice in Wonderland to game-changing present-day vaccine trials. The exhibition takes place across two sites on Broad Street, with the Weston Library focusing on sanitation and the History of Science Museum on vaccines.

The story of Alice Liddell, who inspired Lewis Carroll’s tale, was right at the heart of the earliest efforts to control typhoid in Oxford, especially as Alice’s family was repeatedly affected by typhoid, with her mother nearly dying during one bout. Re-told through captivating digital animation and games, the exhibition takes visitors on a tour from Alice's home in Christ Church  to the city’s poorest areas, to show how the disease spread unseen through contaminated food and water, killing up to one in five of those who became infected. 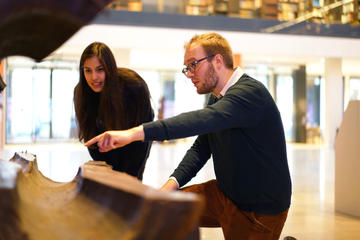 Dr Claas Kirchhelle, of the Oxford Martin School, said: “Our aim with the exhibition is to counter the myth of typhoid as a disease of the past and highlight the threat it still poses to global health. We explore how collective action and international investment in new vaccines, antibiotics, and basic water and health systems in resource-poor areas can help control this neglected threat.”

Linking the past and present of typhoid control, Alice in Typhoidland showcases unique historical documents, maps, and objects ranging from Victorian sewage pipes to new vaccines and antibiotics alongside video interviews with volunteers who tested a new vaccine by drinking a ‘shot’ containing live Salmonella Typhi bacteria.

Following the conclusion of the exhibition in Oxford, it will travel to the Centers for Disease Control & Prevention David J. Sencer Museum in Atlanta, Georgia. A travelling exhibition will also visit Bangladesh, Nepal, Malawi and India.

Alice in Typhoidland runs until 22 March 2020 at the Weston Library, and at the History of Science Museum until 26 July. Find out more on the Typhoidland exhibition website.

Image above: Dr Samantha Vanderslott and Dr Claas Kirchelle with elm-encased lead pipes that crossed over the Thames.