Oxford Botanic Garden, the oldest in the country, marked 400 years on 25 July 2021. To celebrate, the Garden announced a full year of events and initiatives designed to place a spotlight on the Garden’s world class work over four centuries, and its critical role in the future of botanical science, art and culture. 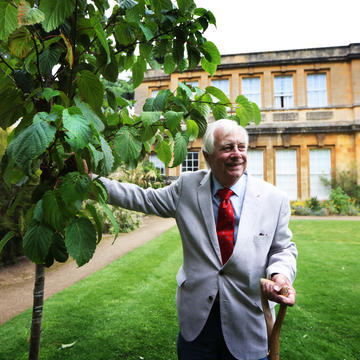 University of Oxford Chancellor, Baron Patten of Barnes, marked the day by planting a handkerchief tree (Davidia involucrata) in a commemorative ceremony performed fifty years ago (1971) by former university Chancellor and Prime Minister, Harold Macmillan.  He said: “As we commemorate four centuries of botanical science here today, it is tempting to dwell on the past and all this Garden’s great achievements.  However, I see this very much as a celebration of the future, and of the botanists who will help shape it.  The world’s flora is under threat and it is up to botanical centres of excellence like this one to meet the challenge.  I applaud our Garden for everything it is doing to research and conserve rare and endangered plants and to raise people’s awareness of the importance of plants in helping tackle some of the grand challenges facing our planet.  And I’m delighted to contribute in some small part by planting this tree here today.”

Botanic Garden Director Professor Simon Hiscock revealed a new rose created by acclaimed rose breeder Peter Beales Ltd to celebrate the 400th anniversary.  In the afternoon, the public were invited into the grounds, to enjoy displays, poetry, music and refreshments. 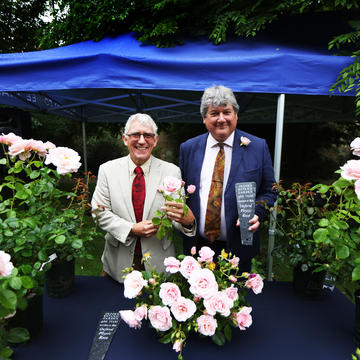 At 2pm, the bells of Magdalen College rang out to mark the precise time when, on this day in 1621, the founding stone was laid, botanical sciences at Oxford began, and an immense source of literary and artistic inspiration for writers such as Lewis Carroll, JRR Tolkien, Evelyn Waugh, Philip Pullman and Colin Dexter was created.

Professor Hiscock said: “We are thrilled to be able to celebrate the 400th anniversary with our visitors, our supporters and the Oxford community. The Botanic Garden is much-loved by Oxford residents and is appreciated now more than ever as people seek to enjoy the wellbeing benefits that beautiful outdoor spaces bring. The Garden has an incredible history, as a place of scientific endeavour and discovery and an inspiration to writers and artists. We hope the anniversary year provides an opportunity for people to discover more about this unique garden and our plans for its future.” 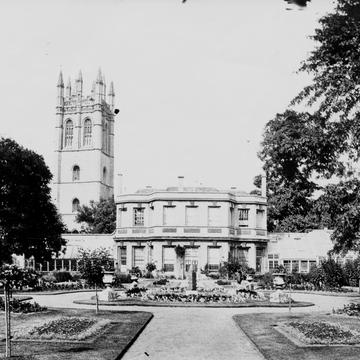 Photo from 1871 of Professor's House in the Botanic Garden

The Garden’s founder, the first Earl of Danby, Henry Danvers KG wanted a ‘Physic Garden’ for teaching medical students about medicinal plants. He leased the five acre site from Magdalen College and, at 2pm on this day in 1621, the founding stone was laid by the University of Oxford’s Vice Chancellor.

Over the next 20 years the level of the land, which sits within the flood plain of the River Cherwell was raised with “four thousand cart loads of mucke and dunge” and a wall with four gateways built to enclose the Garden. It was planted in the 1640s following the appointment of the Garden’s first Keeper Jacob Bobart the Elder in 1642. In 1648, Bobart created a catalogue of all the plants which he grew, now preserved as a treasured ancient manuscript at the Garden.

The Physic Garden was renamed the Botanic Garden in the 1830s by Sherardian Professor Charles Daubeny to reflect its growing focus on experimental botany and taxonomy. In 1946 the Garden was expanded with the lease of a further three acres from Christ Church at the southern end adjacent to Christ Church Meadow.

In 1963 the Botanic Garden expanded further by taking on the management of eight acres of pinetum at the University’s Nuneham Estate at Nuneham Courtenay which then expanded to become the 130 acre Harcourt Arboretum.

Today the Botanic Garden and Harcourt Arboretum is a year-round oasis of biodiversity.  It cultivates 5000 different plants used in research, teaching, conservation, and engaging with the public.

Today the Garden’s mission is to ‘share the scientific wonder and importance of plants with the world’. Botanic gardens play a crucial role in the conservation of the world’s flora at a time when this has never been more important, because two in five of the world’s plant species are threatened with extinction.

Oxford Botanic Garden carries out work around the world with local botanists, for example in Ethiopia, Japan and the Canary Islands, to conserve and protect rare flora. Recently botanists at the Garden described a new species from the rainforests of Malaysia on the cusp of extinction. Research carried out at the Garden focusses on the evolutionary processes by which plants form new species, and the potential for plants to inspire technological design. For example the Garden’s work on a carnivorous pitcher plant, shows potential in applications such as inkjet printing.

The Garden’s vision for the future is to develop new infrastructure, most notably new glasshouses, to expand the plant collections to support this internationally important research and conservation work, and to inspire people with the vital importance of plants at a time when this is needed urgently.