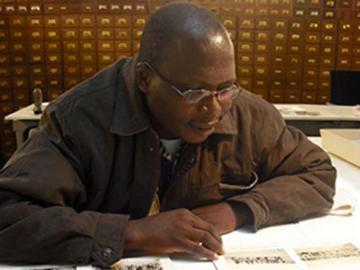 Each CDP studentship is jointly supervised in partnership between one or more of Oxford University Museums and academics from UK Higher Education Institutions (HEI). The partner HEI administers the studentship, receiving funds from the AHRC for the student’s fees and maintenance in line with a standard AHRC award. In addition to this full studentship award for fees and maintenance, Oxford University Museums provides up to £2,000 per annum per student to cover the costs of travel between the HEI and Oxford, and related costs in carrying out research. Studentships can be based at any UK HEI apart from Oxford University.

The Collaborative Doctoral Studentships will involve research that helps us to develop new perspectives on our collections and to share knowledge more widely and effectively with a range of audiences, while also training a new generation of scholars working between the academic and heritage sectors.

The first round of applications led to three awards, to the Universities of Warwick, Cambridge, and Durham, in the fields of 20th-century History of Art, Classics and Ancient History, and African History. Sarah Bevin (Durham/Pitt Rivers Museum), George Green (Warwick/Ashmolean) and Emily Roy (Cambridge/Ashmolean) commence their research in October 2016.

Oxford University Museums is currently accepting applications from potential doctoral supervisors who wish to develop a Collaborative Doctoral Partnership project with one or more of Oxford University’s four museums. The deadline for applications for studentships to start in October 2017 is 17.00 on Friday 25 November 2016.

NB This Call for Applications is only for potential academic supervisors from UK (non-Oxford) Higher Education Institutions. Once the successful partnerships and projects have been selected, a further Call for Applicants for potential PhD students will be issued (in early 2017), and details will be provided on this page.

Studentship projects should be jointly proposed by a member of Oxford University Museums staff in partnership with a colleague from a UK Higher Education Institution.

We can accept CDP applications on any topic provided that the proposed project represents excellent research, and is feasible for collaborative study at doctoral level. In addition to these criteria, priority will be given to applications that involve new or unexpected collaborations across AHRC’s subject areas, which have not previously been developed by the museum or museums in question, and which make a demonstrable impact across the academic, cultural and public spheres. All proposals must fall within AHRC’s areas of subject coverage (.PDF).