A new team of tour guides will be greeting their first visitors on 16 November at the Museum of the History of Science. The volunteers, who have recently arrived in the city as forced migrants from countries including Syria and Iraq, will be running guided tours in Arabic of the museum’s famous collection of Islamic astronomical instruments.

The tours are part of Multaka-Oxford, a project at the Museum of the History of Science and the Pitt Rivers Museum, which creates volunteer opportunities in the museums and uses the collections as a meeting point to bring people together.

Multaka – which means meeting point in Arabic – aims to bring different perspectives to the presentation and interpretation of objects in two collections: Islamic Astronomical Instruments, and Textiles from the Arab World – recently donated by Jenny Balfour-Paul. It also offers people who have recently arrived in the UK the opportunity to practise their English, learn new skills and gain work experience. 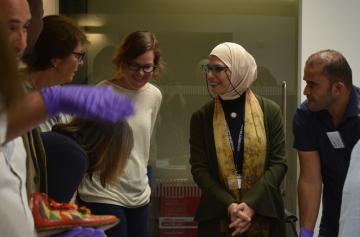 Funded by the Esmée Fairbairn Collections Fund, and working in partnership with local community organisations including Asylum Welcome, Connection Support and Refugee Resource, the two-year project has a team of 26 volunteers, who have recently arrived from Syria, Iraq, Egypt, Zimbabwe, Sudan and Oman.

At the Museum of the History of Science, volunteer guides will deliver tours in Arabic, starting on 16 November at Oxford’s Christmas Light Festival as part of an event funded by Oxford City Council. At the Pitt Rivers, volunteers will deliver tours from 2019 and will help select and label objects for a new exhibition, Textiles from the Arab World, which is due to open next April.

Volunteers at both museums are also actively involved in collections research and documentation, organising events, writing a project blog and managing social media.

Multaka-Oxford builds on a long-standing partnership between the museums and local community organisations and groups. “Over the past seven years we’ve developed a good understanding of the role museums can play in supporting social inclusion and how we can collaborate with local organisations to support communities across Oxford,” says Nicola Bird, Project Manager for Multaka-Oxford. 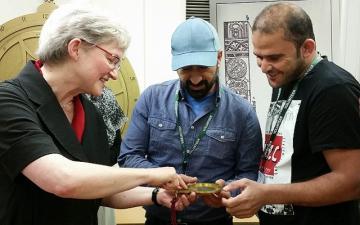 Inspired by an award-winning project which has been running across four Berlin museums since 2015, Multaka: Museum as Meeting Point, the Oxford team have been working closely with their Berlin counterparts to create places where people can meet, share their experiences, knowledge and skills with each other.

Key to the success of the project has been a focus on what skills and experience the volunteers can bring and what they want to gain: an opportunity to learn and practise English, understand a new working culture, build self-confidence, meet new people and integrate into the local community. “The project not only offers practical support such as on-the-job training, but also personal support such as providing a sense of inclusion,” says Nicola.

“We were delighted and happy when we found our heritage in Oxford,” says Abdullah Mohamad Alkhalaf, one of the volunteers. “You gave us confidence in the practice of language and we are not just refugees but people working in their second homeland.”

The story gained coverage in the local, national and international press, including: