Funds raised to acquire the Hoard of King Alfred 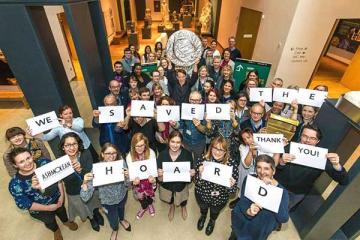 The Ashmolean is delighted to announce that it has raised the £1.35 million required to purchase the hoard of King Alfred the Great discovered in Watlington, Oxfordshire, in 2015.

More than 700 members of the public contributed to the appeal. Lead support was provided by the National Lottery through a Heritage Lottery Fund (HLF) grant of £1.05 million to acquire the hoard and fund a range of educational and outreach activities. With a further £150,000 from Art Fund and contributions from private individuals and the Friends and Patrons of the Ashmolean, the Museum reached its fundraising target within days of the deadline.

"The Watlington Hoard is one of the most exciting and important acquisitions we have ever made, particularly significant because it was found in Oxfordshire. To be able to keep the hoard in the county and put it on display with the Ashmolean’s Anglo-Saxon collections, which include the world-famous Alfred Jewel, was an opportunity we could not miss." – Dr Xa Sturgis, Director of the Ashmolean

Once formally acquired, the Museum will launch an HLF funded events and education programme for the hoard. This will begin on 11 February 2017 when the treasures will be put on display at the Oxfordshire Museum, Woodstock (until 19 March). In collaboration with Oxfordshire Museums Service, the Ashmolean will stage roadshow events around the county which will include talks, object handling sessions and displays of the objects at locations including Bicester, Faringdon and of course in Watlington. The hoard will also be the focus at the Ashmolean’s annual Festival of Archaeology which takes place every year in July.

In October 2015, metal detectorist James Mather discovered an important Viking hoard near Watlington in South Oxfordshire. It dates from the end of the 870s, a key moment in the struggle between Anglo-Saxons and Vikings for control of southern England.

The Watlington Hoard sheds new light on the conflict between Anglo-Saxons and Vikings, and on the relationship between the two great Anglo-Saxon kingdoms of Mercia and Wessex.

The hoard contains over 200 Anglo-Saxon coins, including many examples of previously rare coins of Alfred the Great, King of Wessex (871–899) and his less well-known contemporary, King Ceolwulf II of Mercia (874–879). This is the first large Viking hoard discovered in Oxfordshire, which once lay on the border of Wessex and Mercia. The Watlington Hoard therefore has enormous relevance to our county. At the same time this is a find of truly national importance, providing a major new source of information about this tumultuous time in the history of our nation.

Support from the Heritage Lottery Fund

The Heritage Lottery Fund (HLF) has granted the Museum £1,052,500 to support the acquisition of the Watlington Hoard, as well as conservation, display, touring and education programmes to engage as wide an audience as possible with this exciting discovery. The hoard was declared Treasure by the coroner for Oxfordshire in February 2016 and subsequently valued at £1.35 million by the Treasure Valuation Committee.