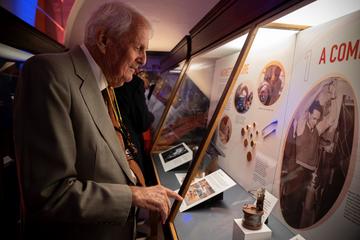 Sir Martin Wood at the launch of the display

Founded by Sir Martin Wood CBE and his wife Audrey in 1959 to manufacture superconducting magnets for use in scientific research, Oxford Instruments was the world’s first university spinout. Starting life in the Woods’ garden shed before expanding to a disused slaughterhouse in north Oxford, the company produced its first copper-wound magnet in 1961 and then began to focus on the new field of superconductors. It went on to have a pioneering role in the development of magnetic resonance imaging (MRI) and manufactured the first commercial MRI whole body scanner.

The display at the History of Science Museum celebrates the company’s 60-year pioneering history of innovation and shows how equipment manufactured by Oxford Instruments has both stood the test of time and been adapted constantly to meet the needs of its users. It features equipment and photographs loaned by the Woods, including the first complete magnet made by Oxford Instruments in 1961 and a miniature model of the Oxford Instruments laboratory created in Lego.

Dr Silke Ackermann, Director of the History of Science Museum, said: “We are delighted to be telling the fascinating story of Oxford University’s first spinout company and celebrating a 60-year history of scientific innovation. We are most grateful to Sir Martin and Lady Audrey Wood for loaning items from their personal collection and for all their help in creating the display.”

The free display, which is located on the lower ground floor of the museum, runs until March 2020. Find out more about Oxford Instruments here.