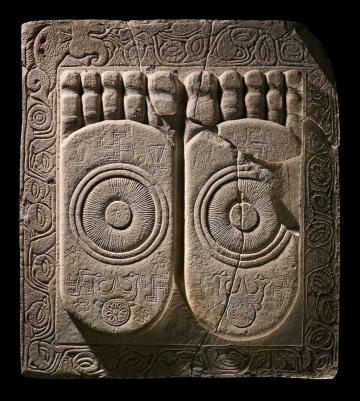 This autumn sees a major focus on the visual culture of the earliest periods of the world’s major religions, Buddhism, Christianity, Hinduism, Islam and Judaism, led by a new exhibition, Imagining the Divine: Art and the Rise of World Religions, at the Ashmolean Museum in Oxford opening on 19 October 2017, curated by Jaś Elsner and Stefanie Lenk.
The exhibition at the Ashmolean is the result of new research produced in collaboration with the British Museum and Oxford University and contributed to by leading scholars, showing the fundamental importance of imagery in the development and explanation of religious ideas.

In the words of Co-Curator, Professor Jaś Elsner, the exhibition “demonstrates how an earlier era of religious transformation and turmoil generated dialogue, encounter and visual exchange which formed the key identities of the world religions. A parallel with the world of today, when cultural exchange, migration and globalization are of critical importance”.
Exhibition consultant Mary Beard commented: “This is a groundbreaking show. Not just fabulous things to look at (though there are plenty of those) – but an attempt to raise big questions about how different cultures have made their gods visible to themselves, how the imagery was formed and evolved, and how different traditions of representation interacted with one another. It couldn’t be more relevant.”

The exhibition draws on the rich holdings of the Ashmolean Museum alongside loans of precious objects that have survived from the earliest periods of each of these religions. Lenders include the British Museum, the Victoria & Albert Museum, National Institution Archaeological Museum of Macedonia, National Museum Scotland, Bodleian Library, British Library, the Nasser D Khalili Collection of Islamic Art, Sarikhani Collection, Corpus Christi College Cambridge, Lichfield Cathedral and Birmingham Museums Trust as well as rarely seen objects from private collections.

Among the rare treasures on show will be some of the oldest surviving Qurans; early Christian sarcophagi from the Ashmolean collection, on display for the first time; a rare cult- statue of Dionysus; early figurative and pre-figurative images of the Buddha; Vishnu avatars; late ancient Jewish artefacts; and a variety of rare maps, scrolls, drawings, coins, manuscripts and amulets.

Imagining the Divine: Art and the Rise of World Religions

Opening times 10am to 5pm Tuesday to Sunday, and Bank Holidays

See the original press release on the Ashmolean Museum website