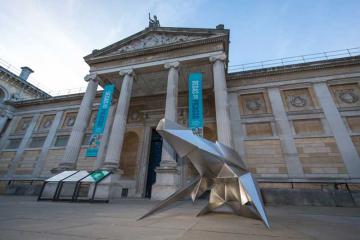 Two monumental sculptures of the twentieth century have been installed in a new display on the Ashmolean’s forecourt.

The large stainless steel sculptures, Howling Beast I and Crouching Beast I, are on loan to the Museum from Blain|Southern.

Lynn Chadwick (1914–2003) was a leading artist of his generation. He came to prominence in the 1950s when he showed two major works at the 1951 Festival of Britain. His work became internationally renowned when he was selected to represent Britain at the 1956 Venice Biennale, where he became the youngest artist ever to win the International Prize for Sculpture.

Chadwick is known primarily for his work in metal inspired by the human form and the natural world. 'Howling Beast I' and 'Crouching Beast I' were both completed in 1990 when, late in his career, the artist was working in a radical way with a new material – sheet stainless steel. The origami-like triangular and trapezoidal panels come together in the form of an animal but at the same time they are fragmented by the play of light and shadow on the faceted surface. Each of the beasts has the vitality of a living creature, caught somewhere between movement and stasis. 'Howling Beast I' is particularly animated with a twisted, upturned neck intimating a powerful canine sound.