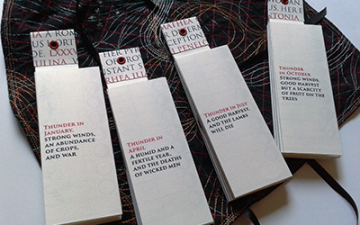 Magic spells, an animated medieval travel guide, and a pilgrim’s shoe are some of the competition entries inspired by medieval manuscripts that have gone on display at the Bodleian Libraries’ Weston Library.

Redesigning the medieval book, on display until 11 March 2018, features the best of over fifty entries from an international competition that challenged contemporary artists and craftspeople to create new works inspired by items from the Libraries' new exhibition Designing English.

There were over 50 entries to the competition, ranging from digital works to adaptations of traditional medieval formats such as religious calendars. The winning entry was designed by artist Sue Doggett, and shows a modern version of a medieval calendar, complete with illustrations to mark modern 'saints' from celebrities to civil rights campaigners. Runner up prizes went to Paul Johnson, Kathy Sedar, and Roy Willingham for their quirky interpretations that featured a beautiful leather-bound manuscript with medieval tales. Honourable mentions went to Angela Callanan for a folding pictorial version of a spell for turning yourself invisible and Shay Hamias for an medieval travel guide for pilgrims to the Holy Land.

To prepare for the competition, artists were invited to attend workshops where items from the Designing English exhibition were on show. Entries were received from the UK, USA, Austria, the Netherlands and Armenia. The competition was judged by Daniel Wakelin, curator of the exhibition Designing English, Russell Maret, the Bodleian’s visiting printer-in-residence, and Sarah Wheale, Head of Rare Books at the Bodleian. The winners were announced by Jay Osgerby, part of the award-winning design company Barber Osgerby.

Daniel Wakelin said: 'It's great to see how everyone has reinterpreted the manuscripts and unusual formats on show in Designing English for this competition. We received an incredible array of entries, from the deceptively simple to the ornate, from the poignant to the comic. Some show that traditional techniques, such as embroidery and calligraphy are still going strong, and others show how medieval ideas and storytelling can be invoked through modern media.'

The accompanying exhibition, Designing English: Graphics on the Medieval Page, open now until 22 April 2018, brings together a stunning selection of manuscripts and other objects to uncover the craft and artistry of Anglo-Saxon and medieval scribes, painters and engravers. Featuring the oldest known surviving book written in the English language, examples of English etched into objects and illustrated copies of masterpieces such as Chaucer's The Canterbury Tales, the exhibition traces the use of English from illicit additions made to Latin texts to its everyday use in ephemeral formats.

Admission is free to both the display and exhibition.

Light up your weekend

Contacting the History of Science Museum