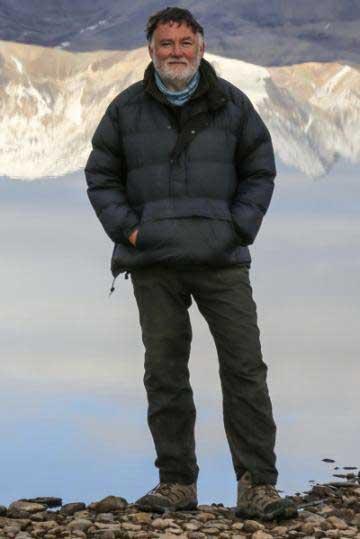 Professor Paul Smith, director of Oxford University Museum of Natural History, has been awarded the prestigious Polar Medal by Her Majesty the Queen, in recognition of his ‘outstanding achievement’ in the field of Arctic research. The award, one of eight this year, was announced in the London Gazette on 20 January.

As a geologist and palaeontologist with a focus on the earliest forms of animal life, Professor Smith has over thirty years’ experience of working in the high Arctic, particularly in Greenland and Svalbard. His early research focused on a multinational programme to create the first geological maps of the north and northeast coasts of Greenland, within the remote Northeast Greenland National Park.

More recent work has examined the environments in which the first animals evolved, 550 to 500 million years ago, during the Cambrian Explosion. His field work in this area has focused on the exceptionally preserved Lower Cambrian fossil fauna of Siriuspasset in northernmost Greenland, and at rocks immediately predating the Cambrian Explosion in the fjord region of Northeast Greenland.

Much of this research involves a return to the same sites over a period of many years. Through this endeavour Professor Smith has witnessed first-hand the accelerating loss of Arctic ice, especially in the far north where Greenland extends to within 450 miles of the North Pole.

Commenting on the award, Professor Smith said: “It has been a huge privilege to work in this remote, entrancingly beautiful but fragile part of the world, and it is a great honour to be recognised for this work through the award of the Polar Medal. The landscape of the far north has changeddramatically over the course of my research career and that rate of change is accelerating. The need for ongoing scientific study and understanding of the Arctic region is therefore ever more important.”

The Polar Medal was instituted in 1857 as the Arctic Medal. It was renamed as the Polar Medal in 1904 when it was awarded to participants in Captain Robert F. Scott’s successful first expedition to the Antarctic. In recent decades most awards have been made to scientists who, over prolonged periods of time and in harsh conditions, have worked to advance knowledge of the Polar Regions.

Read the original article on the Museum of Natural History website.