Museum of Natural History triumphs at 'Oxford for museums' 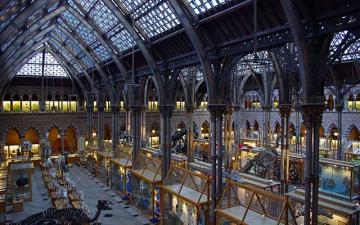 Oxford University's Museum of Natural History has been named 'best of the best' of all UK museums at the Museums + Heritage Awards for Excellence 2016.

This was the top category in the awards which are likened to the 'Oscars of the heritage sector'.

The Museum also won best 'project on a limited budget' for its Dodo Roadshow, which saw the Museum’s dodo specimen travel from Land's End to John O'Groats in just eight days, touring 24 museums and galleries on the way.

The Museum shows no sign of resting on its laurels. Next Friday it will open its latest exhibition, Microsculpture: The Insect Portraiture of Levon Bliss.

It features tiny insect specimens from the Museum's collections, which have been photographed by photographer Levon Bliss and transformed into large-format, illuminated installations.

The exhibition opens on 27 May and, in the meantime, readers can browse its interactive website.

The Bodleian Libraries also scooped the best marketing award for their campaign around the acquisition of their 12 millionth printed book, Percy Bysshe Shelley's 'Poetical Essay'.

Read original story on the Univeristy of Oxford website.