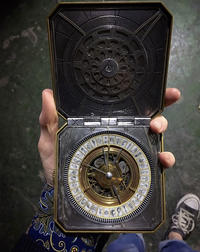 Alethiometer from His Dark Materials at the History of Science Museum

Pitt Rivers Museum, the History of Science Museum and The Story Museum collaborate to recreate ‘Lyra’s World’ across the city that inspired the trilogy.

To coincide with the BBC’s third and final instalment of His Dark Materials, fans will be able to trace Lyra’s steps around the city that inspired its author, Philip Pullman, to see props and costumes from the show on display at the Pitt Rivers Museum, the History of Science Museum and The Story Museum.

His Dark Materials comprises three critically acclaimed novels – Northern Lights, The Subtle Knife, and The Amber Spyglass – which have since been adapted for television. The trilogy follows Lyra Belacqua, an orphan brought up in Oxford, who lives in a parallel universe in which science, theology and magic are entwined.

A golden compass-like alethiometer, an amber spyglass and a subtle knife are all objects critical to Lyra’s journey. They, and many other props and costumes, will be on display on loan from production company, Bad Wolf.

The History of Science Museum on Broad Street has recreated Lyra’s study in Jordan College and is displaying iconic costumes worn by the Master of Jordan College as well as Lyra, Will Parry, Mrs Coulter, Lord Asriel, Billy Costa, Roger Parslow, and Dr Mary Malone. Visitors can see Lyra’s alethiometer on display alongside astrolabes, astronomical compendia and sundials from the museum’s collection, all of which were a source of inspiration for Pullman. 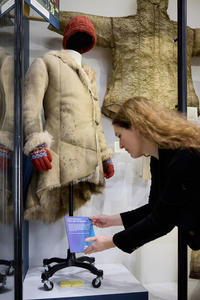 Lyra's coat from His Dark Materials in Pitt Rivers Museum

Pitt Rivers Museum (entry via the Museum of Natural History on Parks Road) features in the book, The Subtle Knife, and was a location for the TV series. An amber spyglass, seed pods from the Mulefa World and Mary Malone’s I Ching Sticks will be on display in various cases around the museum, integrated with the original historic displays that influenced the author, including objects from the Arctic Circle. Lyra’s coat, hat and gloves, and Ruta Skadi’s dress, armour and throwing nails and Mrs Coulter’s locket also feature.

At The Story Museum on Pembroke Street, visitors can discover the iconic subtle knife, the dress worn by witch Serafina Pekkala, and the green writing case and airmail letters written by John Parry to his wife. These objects will appear alongside existing Story Museum exhibits including Pullman’s very own alethiometer, which he had specially commissioned in 2005.  There will also be an immersive experience for those who want to relive the scene in which Will Parry is first presented with the knife in the Torre degli Angeli.

The displays run through to April 2023.

Dr Silke Ackermann, Director of the History of Science Museum, said: “It is such a delight to be collaborating with the Pitt Rivers Museum and The Story Museum to showcase the wonderful props and costumes from the popular and widely acclaimed BBC adaptation of ‘His Dark Materials’. Personally I have been wanting to juxtapose Lyra’s Alethiometer with the stunning instruments in our collection that inspired Philip Pullman for many years, so for me this is a dream come true.”

View His Dark Materials amongst the displays in Pitt Rivers Museum