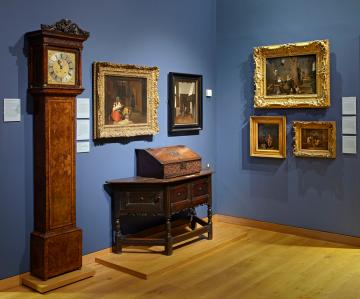 Many of the Ashmolean's galleries of Western art have recently undergone major redisplays. Why not come and see some of the new objects and collections on display this summer?

A new look for Dutch and Flemish Art
Gallery 45
This gallery, which formerly focused on Dutch Art, has recently been transformed to include Flemish works of art from the 17th century. It houses paintings, furniture and ceramics which were created in the Netherlands, an area roughly covering modern-day Belgium and the Netherlands. The redeveloped gallery now tells the complete story of the Netherlands, showcasing Protestant Dutch works as well as Catholic Flemish art. Portraits and landscapes hang alongside genre scenes and religious subjects. Many of these paintings have not been shown for a long time, including a handful of paintings by the Antwerp master, David Teniers the Younger. Other highlights include works from the School of Rembrandt and a group of landscapes by Salomon van Ruysdael and his nephew Jacob van Ruisdael.

Frua-Valsecchi Collection Loans
Generous loans of important works of art from the private collection of Massimo and Francesca Valsecchi, built up over the last fifty years, have inspired beautiful new displays across the Ashmolean.

Landscape Oil Sketches
Gallery 50
Two major collections of late 18th- and 19th-century landscape oil sketches are now on view, with works of art from the Frua-Valsecchi Collection now complementing those on long-term loan from the John and Charlotte Gere Collection. Both collections were predominantly formed at a time when there was little wider appreciation for the landscape oil sketch as an independent genre. Made before the age of Impressionism and typically undertaken as training exercises or personal studies, these sketches were painted out of doors, or retain the freshness of touch associated with landscapes painted on the spot. Such sketches were not originally intended for public display and tended to remain in the possession of the artists and their families. They rarely appeared on the commercial marketplace until much later.

Eighteenth Century Art
Gallery 52
The rich collection of paintings on display in the new ‘Arts of the Eighteenth Century’ gallery includes works by some of the most celebrated European artists of the period; Reynolds, Gainsborough, and Hogarth in Britain, Watteau, Chardin and Vernet in France, and Tiepolo and Carriera in Italy. Shown together with a range of porcelain, ceramics and goldsmith’s work, the different media, genres, styles and schools on display in this gallery highlight the striking dynamism and diversity of European art during the eighteenth century. Works on loan from the Frua-Valsecchi Collection are integrated throughout the gallery, and have inspired the massed display of portrait and expressive heads on the west wall, which evokes the character of a private collector’s home.

Textiles Gallery
Gallery 5
In this gallery an exciting new cross cultural display juxtaposes colourful ‘Favrille’ glass vases by the American designer Louis Comfort Tiffany (1848-1933) with a magnificent silk hanging embroidered with peacocks that was made in Japan during the same period. The Tiffany glass vases have been generously loaned from the Frua-Valsecchi Collection. Despite being made thousands of miles apart the glass and the Japanese embroidery harmonise together beautifully. The peacock feather motifs on the iridescent glass echo those meticulously embroidered on the hanging. Both the glass and the embroidery evoke the rich and intoxicating ‘artistic’ interiors of the late nineteenth and early twentieth centuries.

West meets East Gallery
Gallery 35
Exciting new displays in this crossing-cultures gallery include an ‘aviary’ of porcelain and enamel birds from Germany, China and Japan.  This includes a magnificent eagle and an owl from Augustus the Strong’s celebrated porcelain menagerie in Dresden. In the year marking the 300th birthday of Thomas Chippendale, a particularly appropriate new addition is an elegant bedside bookcase made by Chippendale for celebrated actor David Garrick and decorated in the fashionable chinoiserie taste of the 1770s. This has been generously lent by the Frua-Valsecchi Collection.  Newly added paintings in this Gallery include an 1850s view of the famous Bund in Shanghai, long before its iconic art deco buildings were conceived and the long-term loan of a rare 17th-century view of Brazil by Frans Post, the first European artist to paint South America.