From today two new faces will be added to the iconic sculpted heads lining the railings on Broad Street. Two new heads will be temporarily mounted on plinths outside the History of Science Museum, and will be representations of women from different ethnic backgrounds. 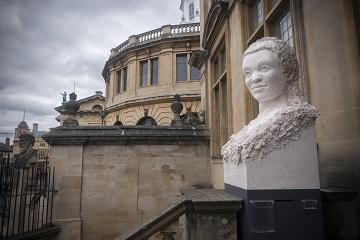 The aim of the installation is to open up a dialogue on how public sculpture can be diversified now and into the future to better represent the modern Oxford community. The success of the 2017 Diversifying Portraiture at Oxford project led to the idea to look at how the same principles could apply to the artistic work in Oxford’s public spaces. The project is funded through the University’s Diversity Fund.

Not much is known about the 13 sculpted heads that have lined Broad Street for 350 years. The current heads, thought to represent ancient philosophers or emperors, are the third set of busts that have occupied the space. Despite their historical and cultural value, the first two sets of heads were never fully recorded and their whereabouts remained largely unknown for many years. Work by the University’s School of Geography and the Environment recovered most of the first and second set of heads in 2017 and they are now on display in the Weston Library’s exhibit Oxford’s Stone Heads: History and Mysteries until 21 July 2019.

In addition to the two new female heads, an interactive art installation will also be open outside the History of Science Museum. The exhibit features a large pink face, which visitors can walk under to hear the ‘voices’ of the busts on the railings. The artists will be there constructing the installation from 18–21 June, and they encourage the public to stop by to find out more. 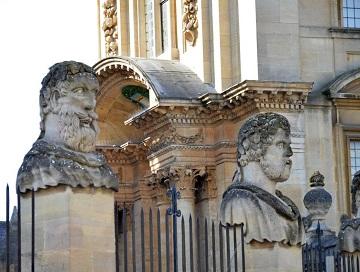 Members of the University and the local community are invited to give their responses to the question ‘How can we diversify public sculpture to better represent the people in today’s University of Oxford?’ by submitting written responses through the postboxes in the plinths under the temporary busts in front of the History of Science Museum. Ideas can also be put forward on Twitter using the hashtag #DiversifyingPublicSculpture.

For those who want to express their ideas in a more visual format, the museum will be hosting a free clay modelling workshop on 22 June. Open to all, the public are invited to sculpt their own version of a head, or something else, which would add diversity to the ancient stone heads. There will be tips on clay modelling and inspiration from the work of contemporary artists. The sculptures will be put on display inside the museum while the temporary heads are on display outside, as part of the conversation about what is possible for the future of Oxford.

To find out more read the article on the History of Science Museum website.