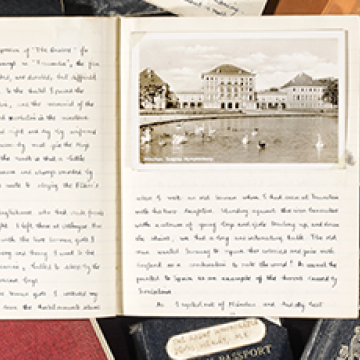 The personal archive of Labour politician Denis Healey (1917-2015) has been acquired for the nation and allocated to the Bodleian Libraries in Oxford through the Acceptance in Lieu Scheme.

Healey was the International Secretary of the Labour Party (1945-1952), Member of Parliament (1952-1992), Secretary of State for Defence (1964-1970) and Chancellor of the Exchequer (1974-1979). He was known as a politician with a 'hinterland', by which he referred to his broad cultural enthusiasms. The recently acquired archive sheds a fascinating light on this aspect of Healey’s life, as well as providing valuable material for the study of his political career.

The archive is very rich in drafts of speeches and articles, as well as wide-ranging personal correspondence and documents relating to Healey's political career. The political material shows his particular interest in foreign affairs – the relations between Russia and the West, between Britain and Europe, events in the Middle East. Press-cuttings, videos of Healey's speeches and television appearances and political ephemera supplement the manuscripts and correspondence. The archive also includes his narrative diaries dating from the 1930s to 2015. Healey was an enthusiastic photographer, and the collection contains a number of photographic prints and slides, which reflect one of the many artistic and cultural interests for which he was known.

Highlights from the archive include:

The archive was offered with a condition that it be allocated to the Bodleian Libraries, Oxford. At the Bodleian, the archive will complement the papers of several other key figures from Labour Party history. Healey's political career began in Oxford, as a student at Balliol College, where he was deeply involved in left-wing politics through both the Labour and Communist Parties. The allocation of Healey's archive to the Bodleian Libraries will therefore allow for the archive to be studied in the city where Healey began his political career. The archive will not be immediately available for consultation as this extensive collection requires processing.

Edward Harley, Chairman of the Acceptance in Lieu Panel, said:

'This archive is not only useful for the history of the Labour party from the 1940s through to the 1990s, but it also gives a fascinating insight into the personality and enthusiasms of a political figure known for his breadth of interests. I am confident that this archive will prove of great interest to scholars of twentieth-century politics. I am very pleased that the Acceptance in Lieu Scheme has helped it to find a home where its potential for scholarship will be fulfilled.'

'This rare collection gives a unique insight into one of Britain's most prominent 20th century politicians. I am pleased that thanks to the Acceptance in Lieu scheme, this important archive will be available to academics and researchers to study at the Bodleian Libraries for years to come.'

'We are delighted that the Bodleian Libraries has been allocated Denis Healey's personal archive and it's particularly appropriate that it will be kept in Oxford where he began his political career. The archive complements the Libraries' strong holdings in 20th century politics, which include the papers of several of Healey's contemporaries such as former prime ministers Harold Macmillan and James Callaghan, former labour MP Barbara Castle and politician Roy Jenkins. We are very grateful to Healey’s family and to the AIL scheme for this excellent outcome.'