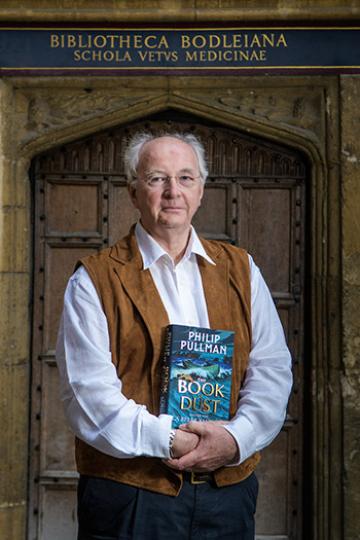 Philip Pullman officially launched the publication of La Belle Sauvage, the first volume in his new Book of Dust trilogy at a special event at the Bodleian Libraries this week.

La Belle Sauvage centres on the story of Malcolm, an 11-year old boy who lives alongside the river Thames in Oxford. The new trilogy is considered an 'equel' that sits alongside his hugely popular His Dark Materials trilogy and is the first new book to be set in that world since the publication of the award-winning The Amber Spyglass in 2000.

To mark the launch, Pullman was joined in conversation with Richard Ovenden, Bodley's Librarian in front of an international press conference in Convocation House on Wednesday 18 October, ahead of the books official publication on Thursday 19 October, Pullman's 71st birthday. During their talk Pullman discussed the inspiration for the new trilogy and read an excerpt from his new book set in Duke Humfrey's Library, the oldest reading room at the Bodleian.

The first book and the still-to-be-named second book cover two parts of Lyra Belacqua's life: starting at the beginning of her story, 10 years before Northern Lights, and returning to her 20 years later.

Parts of La Belle Sauvage are set in The Bodley, a fictional library based on the real-life Bodleian Library. Many other familiar real-life Oxford locations feature in the book, including Godstow Abbey, The Trout Inn, Port Meadow and Jericho.

During their talk, Pullman said that 'nothing is more fun that writing about villains' and also spoke about the dark themes found in the book:

'His Darker Materials, perhaps? I think that is true. I've got older too, perhaps more cynical and closer to despair and all that sort of thing. Yes, it is a darker book, I can't deny that. But that's the story that wanted to be told.'

Pullman also spoke about the importance of libraries as preservers of knowledge and discussed a scene from the new novel where a fictional Bodley's Librarian has to make a tough decision about whether to handover or hide a wanted item.  Richard Ovenden revealed this was a passage that sent chills down his spine and he recounted a real-life story of how the 4th Bodley's Librarian refused to burn the banned works of the English poet John Milton, instead removing them from the catalogue and keeping them hidden until they were safe to be again made available.

Afterwards Pullman met 50 lucky winners of a Waterstones competition in the Bodleian's Divinity School, which became the fictional Jordan College for the night. Philip Pullman was also joined by actor Anna Maxwell Martin, who played Lyra in a National Theatre production of His Dark Materials, to discuss the new book and read selected excerpts aloud.