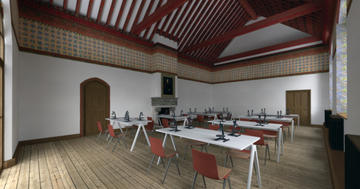 A beautifully decorated space in Oxford University Museum of Natural History is to be restored and opened to public use for the first time, as part of a £1.3m National Lottery Heritage Fund project. The Westwood Room, designed in the 19th century as part of a comprehensive decorative project led by the Pre-Raphaelites, will be returned to its original 1860 condition. It features colourful wall friezes, dramatic ceiling beams, and entomological detailing, including a carved interpretation on a stone fireplace of stag beetle and hawkmoth life cycles. Work is due to start in December 2021, subject to Listed buildings consent, with the paintwork restoration taking place in March 2022.

The work is part of the HOPE for the Future – Heritage, Outreach and Preservation of Entomology project, which is centred around the Museum’s nationally significant collection of over a million British insects, material which spans almost the entire history of British entomology. Made possible by National Lottery players, HOPE for the Future will re-house and make more accessible this collection, which was previously stored in the Westwood Room. The project also includes a major programme of community outreach and education, and a new permanent exhibition space, both on the themes of insects, ecology and biodiversity.

The restored Westwood Room will become a new multi-use space for a range of public activities in the Museum, including workshops, adult day schools, sixth form study days, family activities, and the hosting of special interest groups. The work is being overseen by Oxford University Estates Services and includes specialist conservation and restoration by consultants Crick-Smith. The friezes will be delicately cleaned, repaired and retouched, with lighting, power, floor finishes, paintwork and joinery also being improved or restored. Once complete, the original decorative scheme of the Westwood Room will be conserved and enhanced with no detrimental effect to the building fabric or structure.

Commenting on the project, John Holmes, Professor of Victorian Literature and Culture at the University of Birmingham, and an Honorary Associate of Oxford University Museum of Natural History, said:

“Science, nature, art and decoration all come together in the Westwood Room. This National Lottery restoration project will enable the public to enjoy a unique and beautiful space that inspired William Morris and helped to launch the Arts and Crafts movement in England and worldwide.”

The Museum is running an ongoing programme of public events as part of the HOPE for the Future project, including Creepy Crawly Comedy with Jericho Comedy on 12 November, and insect-themed family activities for October half-term.

Read more about HOPE for the Future