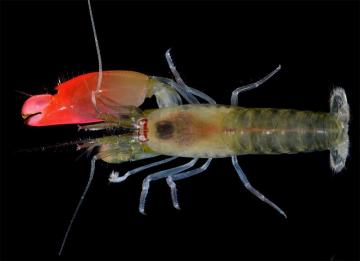 A strikingly bright pink-clawed species of pistol shrimp, discovered on the Pacific coast of Panama, has been given the ultimate rock and roll name in recognition of the discoverers' favourite rock band - Pink Floyd. The conspicuously coloured pistol shrimp has been named as Synalpheus pinkfloydi​ in the scientific description of the species, published as open access in Zootaxa journal today (12 April 2017).

Just like all good rock bands, pistol shrimps, or snapping shrimps, have an ability to generate substantial amounts of sonic energy. By closing its enlarged claw at rapid speed the shrimp creates a high-pressure cavitation bubble, the implosion of which results in one of the loudest sounds in the ocean - strong enough to stun or even kill a small fish.

Combined with its distinct, almost glowing-pink snapping claw, ​Synalpheus pinkfloydi ​is aptly named by the report's authors, Arthur Anker or the Universidade Federal de Goias in Brasil, Kristin Hultgren of Seattle University in the USA and Sammy De Grave of Oxford University Museum of Natural History.

De Grave, Head of Research at the Museum of Natural History in Oxford, has been a life-long Pink Floyd fan and has been waiting for the opportunity to name the right new species after the band.

​" I have been listening to Pink Floyd since 'The Wall' was released in 1979, when I was 14 years old. I've seen them play live several times since, including the Hyde Park reunion gig for Live8 in 2005. The description o fthis new species of pistol shrimp was the perfect opportunity to finally give the nod to my favourite band." he says.

​"I often play Pink Floyd as background music while I'm working, but now the band and my work have been happily combined in the scientific literature."

Synalpheus pinkfloydi​ is not the only pistol shrimp with such a lurid claw. Its closely-related and similar-looking sister species, Synalpheus antillensis, ​scientifically described in 1909, is found in the western Atlantic, including the Caribbean site of Panama. But the authors of the new paper found that the two species show considerable genetic divergance, granting S. pinkfloydi ​a new species status and its very own rock and roll name.

Animals feature frequently in the Floyd back-catalogue. Indeed, the 1977 album Animals​ includes tracks titled iDogs, Sheep, and a suite of music dedicated to pigs. Then there's ​Several Species of Small Furry Animals Gathered Together in a Cave and Grooving with a Pict from 1969's ​Ummagumma​. In fact, other biologists have already named a damselfly after the album: Umma gumma​, in the family Calopterygidae. However, until today there have been no crustacean names known to honour the band.