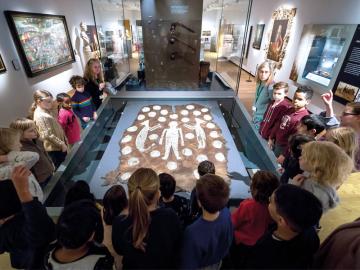 2017 heralds the 400th anniversary of the birth of Elias Ashmole, the founder of the world's first public museum. The Ashmolean will launch a new permanent display in the autumn to explain the Museum's history (and you can help...)

Ashmole is best known as the man who founded the Ashmolean. Although the museum was named for Ashmole, the collection he bequeathed to the University of Oxford in 1677 had been largely assembled by the noted gardeners and collectors John Tradescant and his son, who displayed their treasures at their house in Lambeth known as 'the Ark'.

It is thought that John Tradescant the younger bequeathed the collection to Ashmole in 1659, who then combined it with his own collection of coins and a magnificent library of books and manuscripts. In 1683 he transferred the collection to Oxford, sending it by barge in 26 large chests to be installed in a custom-built museum in Broad Street – now the Museum of the History of Science.

When the Ashmolean was opened in 1683 it was not just a repository and place for research and teaching, but also a public museum. Ashmole's vision ultimately laid the foundations for museums as we know them today, yet this globally-important story is little known.

To mark this important milestone and to share this story more widely, with support from the DCMS/Wolfson Museums & Galleries Improvement Fund, the Linbury Trust and a private individual, the Ashmolean Museum is transforming two key galleries in order to return the founding collections to the heart of the Museum. These will tell the story of Ashmole, and trace the early history of the Ashmolean.

How you can help support the founding collections

The focal point of the new founding collections gallery will be the Powhatan Mantle – probably the principal surviving artefact from the first period of contact between the North American Indigenous Peoples and British colonists. The Mantle may have been a gift from Chief Powhatan – the father of Pocahontas – to King James I.

£25,000 is required to purchase a state of the art display case to ensure this remarkable artefact is given the finest care, and so that its significance can be communicated to the public. An appeal has just been launched to secure the funds to display what Dr Xa Sturgis, Director of the Ashmolean Museum, describes as 'undoubtedly one of the most important and iconic items in our care.'

Dr Sturgis, continues: 'Elias Ashmole is a character who should be better known and the 400th anniversary of his birth is an opportunity to tell his story. We are profoundly grateful to the Heritage Lottery Fund and National Lottery players, and to DCMS/Wolfson, the Linbury Trust and private individuals for supporting the 400th anniversary programme which will help bring the story of the Ashmolean to a wider audience.'