Two University museums – the Ashmolean and the Pitt Rivers – have won awards in this year’s Vice-Chancellor’s Public Engagement with Research Awards, while the Bodleian Libraries received a highly commended. The announcement was made at an awards ceremony on 10 July hosted by Oxford’s Vice-Chancellor Professor Louise Richardson.

The awards recognise academics, researchers and staff at Oxford University who undertake high-quality public engagement activities and who have contributed to building capacity in this area. 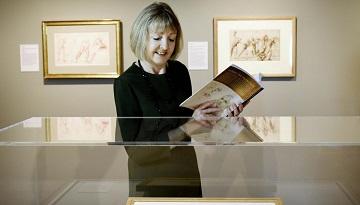 Raphael: The Drawings was a ground-breaking two-year research project at the Ashmolean Museum, which was showcased in a major exhibition held at the Ashmolean from June to September 2017. Audience evaluation showed that 82% of respondents felt their understanding of drawing had changed; while an astonishing 99.9% felt that their views on Raphael had been changed by the exhibition.

The project was led by Professor Catherine Whistler, Head of Western Art at the Ashmolean with Dr Ben Thomas, University of Kent; and Angelamaria Aceto, Ashmolean Museum. Their work brought together 120 drawings from international collections for the exhibition, grouped into thematic strands which interrogated Raphael's impulses and uses for drawing: as a vehicle for creativity and experimentation; a means of working out his ideas and expressing himself; and as a way of engaging and affecting the viewer. The exhibition, which attracted 67,000 visitors, was accompanied by a fully illustrated catalogue; a short film; and a programme of public events, tours and talks.

The project encompassed two activities. 'Kwibuka Rwanda' is a photographic exhibition, which delved into the world of survivors working at memorials, who have pledged their lives to care, clean and preserve the dead bodies of their loved ones. The exhibition, which was developed in consultation with Rwandan partners and ran from April to September 2018, was seen by over 70,000 people and has since travelled internationally and attracted global attention. 'Bearing Witness' follows on from the exhibition, and builds on the collaboration with the Rwanda community. Comprising a case display at the Pitt Rivers co-curated by survivors and a video installation featuring their life stories, it acknowledges the courage and resilience of those who bear the burden of surviving the genocide.

The Pitt Rivers Museum also won a Building Capacity Award for its strategy to facilitate high-quality public engagement with research. The strategy, which was established in September 2017, seeks to support museum staff working in genuine mutually-beneficial partnerships with researchers and communities; develop exciting and robust engagement methodologies; co-create a wide range of activities, such as events, exhibitions and workshops; and ensure public engagement with research is positioned as a core activity for the museum.

The socially engaged approach has had significant outcomes leading to considerable growth in the number of researchers looking to work with the museum, including those from research disciplines who may not traditionally be associated with the Pitt Rivers. It has also led to a broadening in the diversity of audiences with whom the museum engages.

Rosie Sharkey, Education Officer at the Bodleian Libraries, received a highly commended in the Early Career Researcher Category for Library Lates - a new series of free evening events based at the Weston Library. Launched in December 2017, the first five events have created opportunities for 113 researchers to share their work with over 1400 young people and adults through a range of activities, such as mini-talks, tours, creative workshops and hands-on experiments.