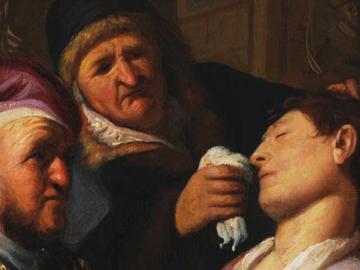 The Senses, temporarily on display at the Ashmolean, are the earliest surviving works by the most famous of all Dutch artists, Rembrandt Harmensz. van Rijn (1606–1669).

Painted when he was around eighteen years old, the four panels depict representations of 'Sight', 'Touch', 'Hearing' and 'Smell', the fifth – 'Sense of Taste' – remains undiscovered. This is the very first time that the four surviving panel paintings have been on show together in public, after 'Smell' was rediscovered in 2015.

The Senses were created around 1624–25 when Rembrandt was still a teenager. They are clearly the creations of a young artist who is still developing his own style but they already show great promise. The Senses reveal glimpses of the celebrated painter Rembrandt would become: his bold use of bright colours, his broad brushwork, his ability to capture human expressions, as well as his experimental treatment of light.

The five senses were a popular allegorical theme in the art of the Low Countries. Traditionally each was represented as a female figure, for instance an elegant woman holding a flower symbolised smell. Gradually the five senses were interpreted in a more moralising fashion, underlining that their excessive indulgence could result in sin. From the 17th century onwards the senses were depicted as genre scenes featuring debauched peasants, where drunkenness might represent taste and amorous couples embracing might symbolise touch. Rembrandt's Senses clearly belong to this later type and depict three half-length figures in constricted spaces, engaged in an activity related to the specific sense. Rembrandt also incorporated a subtle undertone of satire in each painting.