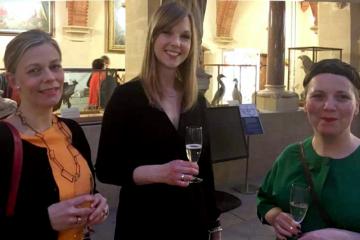 Having reached a point in my career, where taking on a leadership position would be the next natural step, I was interested in spending time with people in similar situations, but also together with already existing leaders, to test out, if I was setting down the right path. Is leadership what I really wanted?

OCL with its combination of cultural leadership issues, embracing both entrepreneurship and risk-taking to me seemed like just the combination, I had been looking for. I was also interested in finding a leadership course, which was different to what is otherwise on offer in Denmark. When I came across the OCL website, this seemed like just what I had been looking for.

Many museum directors had found their way to OCL this year, but we were also fortunate to have other sectors and levels of leadership present. It’s nice with a mix of backgrounds and experience, but at the same time having some cohort members you can mirror yourself in, is an advantage.

For the first time in a very long while – I spent a whole week without checking the clock on my phone – and not one doodle was drawn in my notebook, which is a rarity. My attention was completely absorbed by the programme each day, in every session and every topic.  We were filled with content on so many different levels, and in such variation that it never became boring or irrelevant. Using the city and all it has to offer in terms of spaces and history made you able to put issues into a much larger perspective and context. Walk and talk was also a very important part of the course, where you could share your thought in an intimate space.

Waking up every morning hearing the bells chime from St. Aldates was a real pleasure – even for a non-morning person. As the course was so connected to Oxford University we felt we were part of the environment and that it was also our university and city for the week. The informal chats with the faculty during breaks and at social events were also a gift. The faculty was part of the group – even attending sessions, where they were not involved.

OCL proved to be a mental spa in so many senses. A whole week, where you were allowed to focus on your challenges, fears and wishes in relation to work. The sessions were devised in such a way that you could mirror issues in the presentations and speakers, without them becoming too personal.

A day after arriving home, I updated my CV and starting looking for new career opportunities. It wasn’t so much the thought of really needing a new job that sped me on, but it was the courage and energy of OCL, which was still in my system and needed an outlet. At OCL, I also realised that I had ideas relating to my work, which I needed to turn into real opportunities.