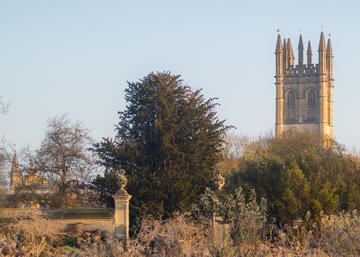 View of the yew tree from the Lower Garden, winter 2018

The yew tree, Taxus baccata, in the Walled Garden at Oxford Botanic Garden is the oldest tree in the Garden's collection. It was planted in 1645 by the first Curator of the Garden, Jacob Bobart.

When Storm Ciara swept across the UK last weekend causing widespread damage and disruption, Bobart's yew tree was among the casualties at the Botanic Garden. Once standing tall and strong, a large section of the upper tree has broken off, strewing branches beneath it. 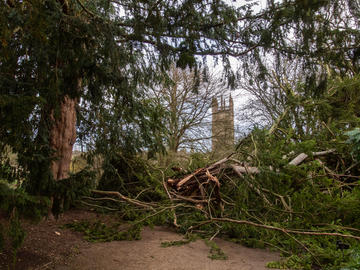 This may on the surface look devastating. However, yews trees can live for thousands of years, making them one of the longest-living native species. And one of the secrets to their longevity is their incredible ability to renew and regenerate.

Over time, the collapsed branches of the Garden's most historic tree will gradually take root and new growth will proceed, and it is expected to make a full recovery.

At just 375 years old, Bobart's yew is still a youngster. It will no doubt go on to withstand many storms in the future.

Spring news from the Multaka-Oxford Project