The Story of the World's First Public Museum 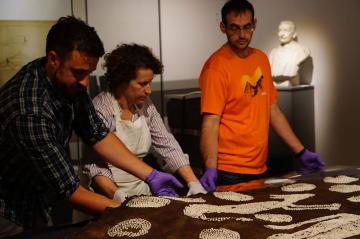 The world’s first public museum, the Ashmolean in Oxford, is celebrating a new permanent gallery called the ‘Ashmolean Story’ which opens today. The gallery marks the 400th anniversary of the birth of the museum’s founder, Elias Ashmole (1617–92) who gave his collection to the University of Oxford in 1677 and founded the Ashmolean in 1683. On display are many of the original artefacts, specimens and curiosities that fascinated museum visitors of the seventeenth century.

Elias Ashmole was a leading intellectual of his day who studied at Oxford and was elected a founding Fellow of the Royal Society in London in 1661. A true Enlightenment polymath, he was interested in everything from natural history, medicine and mathematics, to alchemy, astrology and magic - all popular disciplines in the seventeenth-century. In founding a new public museum Ashmole’s vision was to create a centre for practical research and the advancement of knowledge of the natural world which, in his own words, ‘is very necessary to humaine Life, health, & the conveniences thereof.’ He recommended that the Keeper (head) of the museum should be Oxford’s Professor of Chemistry and the first incumbent was Dr Robert Plot, a noted scientist and naturalist.

Evoking the style and atmosphere of the original museum, the new gallery displays objects related to scientific enquiry and the quest for knowledge that would have captivated visitors in 1680s Oxford. These include a crystal ball probably used by Ashmole for ‘crystal-gazing’ and making predictions; medical equipment and samples like kidney stones, apothecary jars and powders; and an array of natural history specimens of exotic animals, fish and birds. One such specimen that clearly confused Plot was a ‘Gigantick thigh-bone’. He recognized that it was a real bone but could not identify the species due to its enormous size and concluded that it must have been the remains of a giant man or woman. Now known to be part of a femur of a large meat-eating dinosaur, Plot’s illustration was nonetheless the first publication of a dinosaur bone. Plot’s tenure at the Ashmolean came to end in 1689/90 when he resigned both his university posts citing an insufficient salary.

Ashmole’s gift to the University included his own extensive collection of books, manuscripts, coins, medals and other antiquities. It also included the celebrated Tradescant family collection of ‘Rarities’ that had been gifted to Ashmole by John Tradescant the younger. In 1683 Ashmole transferred everything to Oxford from London, sending it by barge in twentysix large chests. Ashmole specified that the new museum should be housed in a building designed to promote scientific practice. In the original Ashmolean in Broad Street, Oxford, there was a repository for the collections on the first floor; a lecture theatre for natural history on the ground floor; and in the basement was a state-of-the-art chemical laboratory and anatomy room. He also provided statutes of governance to guide the museum in achieving its aims, and this original handwritten document is on display in the new gallery. The eighteen statutes include the establishment of a board of governors, an annual inspection and audit, and the cataloguing of all objects that came into the collection. They also established procedures for the care and security of objects, the admission of visitors and museum finances – a model for modern museums and galleries the world over.

While the collections have grown and shifted focus to art and archaeology, the purpose of the Ashmolean is little changed today. The museum’s main aim remains the preservation and display of the collections for enjoyment and the advancement of knowledge. The development of the new gallery has allowed the redisplay of important pieces such as Guy Fawkes’ lantern – a favourite of museum visitors. It has also created space to bring out of storage works such as Ashmole’s portrait collection of scholars and scientists which includes the famous painting of Elizabethan astrologer and mathematician, John Dee.

The gallery development has also provided staff the opportunity to research and conserve objects from the founding collection. One of the most significant pieces that has been redisplayed is Powhatan’s Mantle. Made of four white-tailed deer hides sewn together and decorated with shells, this huge and fragile object is traditionally linked to Powhatan, the father of Pocahontas and chief of the Indigenous North American Powhatan people who lived in Virginia, the area settled by the English in the 1600s. The museum’s conservation team has investigated the mantle with the help of the Factum Arte Foundation using specialized photography and imaging. Archival research into the mantle indicates that it was probably displayed vertically on the wall from the seventeenth century. The loss of shells around the lower border suggests that people were able to touch it and may have taken shells as souvenirs of their visit.

Today, the mantle has proved equally popular. The Ashmolean’s 2017 annual appeal has asked members of the public to support a new high-tech display case for the iconic object. Donors to the appeal have been offered the chance to have their name or a dedication inscribed on the case and more than 200 people have made donations totalling nearly £52,000. Miss Laura Wilson who made a dedication for her grandmother, says: ‘As soon as I saw the Ashmolean Birthday Appeal for the preservation of Powhatan’s Mantle, I knew I had to donate. When I was a little girl, my grandmother, Margaret Pinsent, would often take me to the museum to explore and we would always look at the Mantle – we were in awe of its historical significance. A quarter of a century later and I am still enchanted by this marvelous object and indebted to my grandma for her investment in my education. I cannot wait to see the Mantle in the new gallery and to enjoy it for many years to come.’

In addition to the public appeal, the new gallery has been made possible by a generous donation from Mr Stephen Stow, Fellow of the Ashmolean; a major grant from the Linbury Trust; and a £110,000 grant from the Deparment for Digital, Culture, Media and Sport (DCMS)/Wolfson Galleries and Improvements Fund.

Dr Xa Sturgis, Director of the museum, says: ‘Thanks to the generosity of members of the public, institutional support and private donors, we have been able to mark Elias Ashmole’s 400th birthday with this new gallery. It is a celebration of Ashmole’s vision and of the role the Ashmolean has played in the development of museums and galleries in this country and across the world.’

John Glen MP, Minister for Arts, Heritage and Tourism, says: ‘The Ashmolean Museum’s new gallery will mark 400 years since the birth of its founder Elias Ashmole and government is proud to support this fantastic space with £110,000 from the DCMS/Wolfson Museums & Galleries Improvement Fund. The public support for this project shows how well-loved the museum is and I wish all at the Ashmolean well for this exciting new chapter in its illustrious history.’

Paul Ramsbottom, Chief Executive of the Wolfson Foundation, says: ‘There seems to be an increased interest in the collectors and stories behind the UK’s great museums – and the Ashmolean has a fascinating story to tell. Ashmole’s vision of a place of curiosity which fuels a quest for knowledge is still being realised. We hope there will be many more little Laura Wilsons visiting with their grandmothers and enjoying the delights this new gallery has to offer. The Wolfson Foundation is a charity supporting and promoting excellence, and we are delighted to be funding this through the DCMS/Wolfson Fund – which sends a strong message about the importance of shared public and charitable funding of these great collections.’