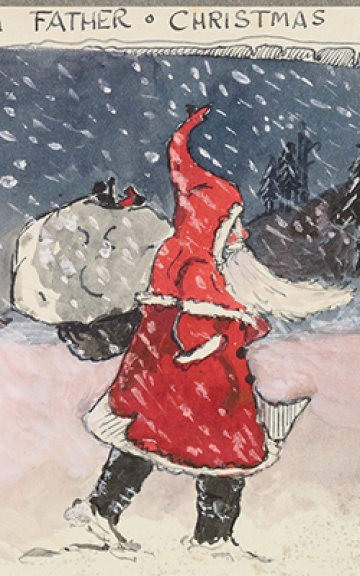 Handwritten illustrated letters from Father Christmas written by the author J.R.R. Tolkien to his four children give a touching insight into Tolkien's personal family life.

The illustrated letters are to go on show at a major new exhibition opening at the University of Oxford's Bodleian Libraries in 2018. Tolkien: Maker of Middle-earth will explore the full breadth of Tolkien's unique literary imagination from his creation of Middle-earth, the imagined world where The Lord of the Rings, The Hobbit and his other works are set, to his life and work as an artist, poet, medievalist and scholar of languages.

Catherine McIlwaine, Tolkien Archivist at the Bodleian Libraries and curator of the Tolkien: Maker of Middle-earth exhibition, said: 'The Father Christmas letters are some of my favourite items in the exhibition. The letters were delivered by the postman, who'd been persuaded by Tolkien to deliver them with the rest of the post, or arrived on the hearth with specially made stamps from the North Pole, marked with the cost of postage '2 kisses'. They contained news from the North Pole where Father Christmas lived with his 'helper' the North Polar Bear, who often got into trouble and caused twice as much work for Father Christmas. As the Tolkien children grew older, the letters from Father Christmas grew longer and the tales became darker and more thrilling.'

In an exciting letter from 1932 goblins make an appearance, living in the caves underneath the North Pole and stealing the childrens' presents from Father Christmas' cellars. Some of the Father Christmas letters were written when Tolkien was engaged in writing one of his most famous works, The Hobbit. The goblins and wargs in that story began to spill over into Father Christmas's letters. Elves, called Red Gnomes, also appear, coming to Father Christmas's aid in his battles with the goblins.

The Father Christmas letters will be on display alongside the largest array of original Tolkien materials from the UK and the USA to go on show since the 1950s. Tolkien: Maker of Middle-earth will feature manuscripts, artwork, maps, letters and artefacts from the Bodleian's extensive Tolkien Archive, the Tolkien Collection at Marquette University in the USA and from private collections.

The exhibition will examine the scholarly, literary, creative and domestic worlds that influenced Tolkien as an author and artist, delighting both Tolkien fans as well as scholars, families and visitors of all ages. Tolkien may be best known today as the author of The Lord of the Rings but during his lifetime he was chiefly known as a scholar of Old and Middle English and a philologist intimately concerned with the creation of language. He was also a devoted husband and father of four children for whom he created stories for pleasure.

The exhibition will be accompanied by a richly illustrated book, Tolkien: Maker of Middle-earth to be published by Bodleian Library Publishing on 1 June 2018. The book is available to pre-order via the Bodleian Libraries shop.

The complete collection of Tolkien's Father Christmas letters have been published by Harper Collins, Letters from Father Christmas, and is available to purchase from the Bodleian Libraries shop.