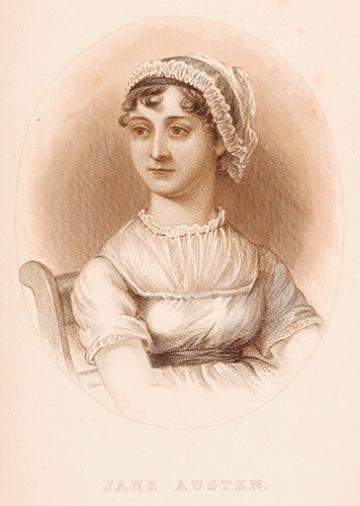 To mark 200 years since the death of Jane Austen, a major new exhibition at Oxford University's Bodleian Libraries will challenge the current public perception of one of England's greatest literary heroes. Open from 23 June to 29 October 2017.

Which Jane Austen? presents Austen as an ambitious and risk-taking businesswoman and a wartime writer who was informed and inspired by the surprising international adventures of her family and relations. Through a spectacular selection of Austen materials displayed together for the first time, the Bodleian Libraries delve into the myriad influences on this great writer's work.

Britain was at war with Revolutionary and Napoleonic France during most of Austen's adult life and three of her brothers served in the military. This exhibition examines Austen as England's novelist of the home front and war as the context for the quiet domestic lives of her characters. Novels like Pride and Prejudice, Mansfield Park and Persuasion are interpreted in the exhibition as wartime texts and set alongside other war writings including military treatises (of which Austen was an appreciative reader) and political cartoons.

The global journeys of Austen's well-travelled family to India, Scandinavia, Africa, China, Canada and the West Indies provided her with a rich international outlook. Austen also read many books that dealt with the far corners of the British Empire. This exhibition illustrates the influence of these international links on Austen's writing, through diaries, letters, naval logbooks and artefacts.

Also explored is Austen's success as a professional writer. The exhibition charts her frequent visits to London to oversee the publication process of her books and to relish the cultural and commercial life of the capital. It traces in rich detail her relationship with John Murray II, the most glamorous publisher in London. Lord Byron and Walter Scott, the best-selling authors of the day, were also on Murray's list.

'Contrary to popular belief, Jane Austen was no retiring country mouse. And while it is assumed that, as an 18th century female, her context was local and her outlook parochial, Austen was always very much a writer of the world.

'To mark the bicentenary of the death of one of our greatest literary heroes, this exhibition presents a 200-year journey ranging from Hampshire to the distant fringes of the British Empire, providing us with glimpses into the many lives of Jane Austen.'

Highlights of the exhibition will include:

'Jane Austen is one of the greatest writers in English literature and this engaging exhibition draws on the Bodleian's rich collection of Austen materials to illuminate the many different sides of this much-loved author. With fresh interpretation and a compelling array of objects, I hope Which Jane Austen? will provoke visitors to reconsider what they know about this national treasure.'

An accompanying publication to the exhibition, Jane Austen: Writer in the World, will be released by Bodleian Library Publishing on 26 May 2017. Other forthcoming Jane Austen titles from Bodleian Library Publishing include: Jane Austen: Illustrated Quotations (released on 23 June 2017) and Jane Austen: The Chawton Letters (released on 15 September 2017). In addition, a facsimile of Volume the First, Austen's collection ofteenage writings, is available now. For more information or to pre-order forthcoming titles, visit the Bodleian shop.
Which Jane Austen? will be accompanied by an engaging programme of free talks and events, which will be held at the Bodleian's Weston Library.

A range of other events are taking place nationwide throughout 2017 to mark the 200th anniversary of the death of Jane Austen (18 July), including The Mysterious Miss Austen, an exhibition at the Discovery Centre, Winchester (13 May-24 July), and events at Jane Austen's House Museum, Chawton, Hampshire.