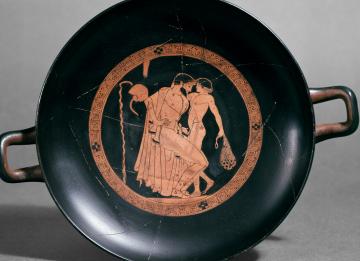 This style of ceramic wine cup is known as a kylix. This example shows a homoerotic scene between two males of different ages. These relationships were characteristic of the Archaic and Classical periods of ancient Greek history and were considered to be "the principal cultural model for free relationships between citizens” [1].  These relationships may have originated in an initiation ritual associated with the younger partner’s entrance into military life or the religion of Zeus and developed in the late 7th century BC as an aspect of Greek homosocial culture. They may also have been encouraged by ancient Greek interest in athletic and artistic nudity, the practice of delayed marriage between aristocrats, the social seclusion of women and even as a way of population control. It was both idealised and criticised practice, and varied according to local custom. It had its own complex social-sexual etiquette and was an important social institution among the upper classes.

This system, called paiderastia, is the origin of the modern word ‘pederasty’, which implies the abuse of minors by an older person. However, ancient Athenian law recognised the importance of consent and age was not a factor in regulating sexual behaviour. The age range when boys entered into such relationships (15-18 years old) was comparable with that of Greek girls given in marriage, often to adult husbands many years their senior. Boys usually had to be courted and were free to choose their partner, while marriages for girls were arranged for economic and political advantage at the discretion of the father and suitor. The relationship with an influential older man resulted in an expanded social network seen as beneficial for the boy and his family before the boy was married himself. On the other hand, if a male citizen of free status prostituted himself to an older lover, the law in Athens prohibited him from performing some public functions because it was feared that, since he had sold his own body for the pleasure of others, he might not hesitate to sell the interests of the community as a whole.

Regarding the technique used to decorate this kylix, ‘red-figure’ vase painting, as this is known, was one of the most important styles of figural Greek pottery. It was developed in Athens between the 6th and 3rd centuries BC and replaced the previous style of ‘black‐figure’ decoration. The main areas of red-figure production were Attica (Athens and its territory) and southern Italy, and it was produced and exported in such large quantities that thousands of pieces have been preserved, especially in tombs in southern and central Italy. Some of the vessels can be ascribed to individual artists or schools, and their shapes and decoration can be used to explore ancient Greek cultural history, daily life, iconography and mythology. Both styles of black- and red-figure ware were achieved by using an elaborate three‐phase firing technique. The paintings were applied to the shaped, but unfired, vessels after they had dried to a leathery, near‐brittle texture. Red‐figure depictions, enhanced with fine brushwork, are generally more realistic than the incised black‐figure examples, and depict humans and animals not only in profile, but also in frontal, rear or three‐quarter perspectives, giving depth to their scenes.

$50 US banknote countermarked with the words 'Lesbian Money'

Cast of a Soskiles Capitoline Amazon

Dish with a composite head of penises

Seated figure of the bodhisattva Guanyin

Statue of King James VI and I