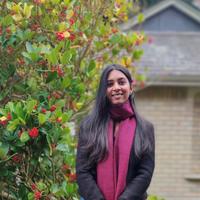 Shreya studied History at St Stephen's College, University of Delhi. Subsequently, she earned her MA in South Asian History from SOAS in 2020. Academic endeavours as well as various volunteering experiences made her interested in museums, especially the role they play in helping the larger public engage with their history and heritage. Furthering her interests, she worked in the cultural sector, researching, and writing essays for arts and culture publications as well as curating content for Indian History platforms on social media. In a particularly exciting project, she was part of the Curious Curatorium, a group of students who worked in collaboration with Delhi Art Gallery Museums to curate an online exhibition on the works of Bengali artist Chittaprosad Bhattacharya. Shreya believes in making history accessible by bridging the gap between academic and public histories. She hopes to further this goal by disseminating her research on museums and South Asian collections through publications, blogs, exhibitions, and other creative mediums.

Shreya’s CDP project looks at the history of four collections of Indian coins. These are currently held in the Ashmolean, the British Museum and the Fitzwilliam Museum. While these collections are named after four British male coin collectors – Jose Gerson da Cunha, H. Nelson Wright, Alfred Master and R. B. Whitehead, we know little about the Indian scholars who helped them in assembling these collections. Shreya aims to uncover the role of Indian scholars and collectors in creating these coin collections. She will study how they were involved in collecting, investigating, and studying coins. She also intends to learn about their relationships with the British collectors.
The larger aim of the project is to investigate the role of Indian scholarly networks in producing expert knowledge about Indian history. It will contribute to the project of decolonising museums by telling a fuller history of South Asian colonial collections housed in various museums in the UK.