Emily Roy (University of Cambridge in collaboration with the Ashmolean Museum) 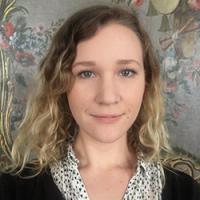 Emily completed her BA in History of Art at Oxford in 2010. After internships in the Ashmolean Print Room and Waddesdon Manor (National Trust), she completed her MA in Russian Studies at the School of Slavonic and East European Studies, UCL. Emily returned to work at Waddesdon Manor in 2012 where she has held a range of curatorial and collections management roles, most recently that of curator.

Emily’s CDP doctoral project is undertaken as part of a collaboration between the University of Cambridge and the Ashmolean Museum. Emily’s research uses an interdisciplinary approach to examine key questions on modernization, the city and cross-cultural exchanges in Enlightenment and 19th-century Russia. The primary, unpublished research material is found in the Talbot Collection in the Ashmolean Museum, a unique and virtually unknown resource of c.1000 prints dating from the early 18th to the mid-19th century, whose imagery relates to the construction and character of St Petersburg as an imperial capital. This collection was assembled in the west during the Soviet era by Gwenoch David Talbot (d.1972), who had been a successful businessman in pre-revolutionary Russia.

The engravings, etchings and lithographs that he amassed testify to the vitality and range of print culture in Enlightenment Russia, revealing state-sponsored initiatives, entrepreneurial outputs, the adoption of new technologies, and the existence of transnational networks of production and publication. These and other issues will be examined to illuminate the nature of print production and dissemination within the context of Russian modernization and urbanization, against a backdrop of rapid social and political change.