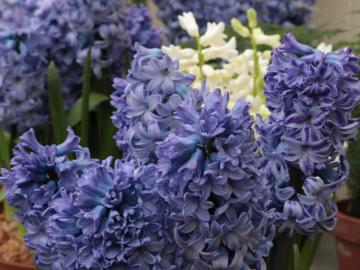 The hyacinth is a lovely flower, with bursts of petals. The name is derived from the ancient Greek huakinthos, following the ancient Greek myth of Hyacinthus, which tells the story of the origin of this flower. The story goes that the god Apollo fell in love with Hyacinthus, a beautiful man admired by many. One day the pair were throwing discus when tragedy struck. In some versions of the myth, Hyacinthus tried to impress Apollo by running to catch a discus that Apollo had thrown. Another version has Zephyrus, the West Wind, overcome by jealously of the two lovers, blowing the discus off course. In both tales, the discus struck Hyacinthus in the head and killed him where he stood. Rather than let Hyacinthus travel to Hades, Apollo gathered his blood and used it to create a new flower, thought to be the hyacinth.

The gay association with the name hyacinth has continued. In the 1980s, the Polish secret police documented around 11,000 men thought to be homosexual, as well as their friends. This was known as Operation Hyacinth. 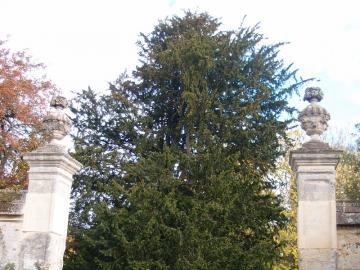 Have you heard about the “transgender tree”?  In a church graveyard in Fortingall, Scotland, there is a European Yew thought to be several thousands of years old. This type of yew has a clear distinction between the sexes as the males produce pollen and the females produce bright red berries. It was something of a surprise when, after many years of displaying male characteristics, this ancient tree suddenly sprouted berries from a branch. In reality, rather than being a transgender sex-change, this is actually a display of intersex behaviour and is not uncommon in other conifers. The reason for this is thought to be a change in the tree’s hormones, creating another example in nature of non-binary sex and showing that such things are not always black and white. The yew tree here in the Botanic Garden is also male. However, in the 1980s and in 2012 it too started to produce female cones on some of its branches. 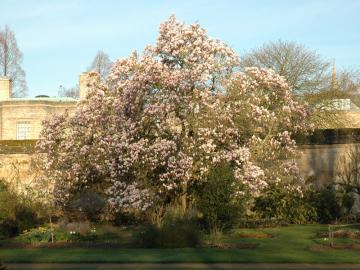 The Saucer Magnolia is one of many hermaphrodite (intersex) plants, which have both male and female organs in their flowers. Other examples growing around the Botanic Garden include roses, lilies and asters. Hermaphroditism allows these plants to reproduce by themselves, as well as with other plants. This is gives them a great survival advantage, as it means they can reproduce frequently, even in isolated environments.

In the early 19th century, French army officer Etiene Soulange-Bodin created the Saucer Magnolia by cross-breeding two different Magnolia species (Magnolia denudata and Magnolia liliiflora). The Saucer Magnolia is hardier than its parent plants and blossoms during the early spring time. It has delicately coloured flowers, with petals that turn from pink to white at the tips. Given that the Saucer Magnolia has two-tonal petals and two sex organs in each flower, it is a perfect example of how non-binary living things can be beautiful. It is prized as an ornamental shrub and is often used to adorn gardens or outdoor spaces.