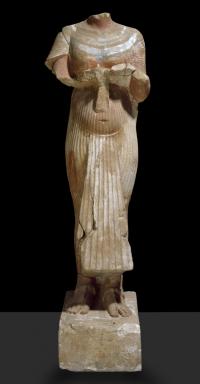 This sandstone statue of Akhenaten contains many androgynous physical characteristics which have led to contemporary speculation on the king's gender and sexuality, health and religious beliefs. Akhenaten was a progressive pharaoh of the 18th Dynasty, who introduced great changes to ancient Egyptian religion and art. This has led to some scholars suggesting that Akhenaten’s feminine physique may have been a conscious attempt by the king to make a clear distinction between the artistic output of his reign and that of previous periods. It has further been suggested that this new androgynous form was an attempt to portray the pharaoh as a combination of both the male and female divine. Akhenaten promoted one creator god, the Aten sun disc, in place of the rest of the ancient Egyptian pantheon, such as Isis, Amun, Hathor and Tawaret. As a creator god, the Aten had male and female attributes, and the king’s portrayal of himself in this way may have been to emphasise his special relationship with the Aten as the all seeing all knowing, “mother and father of all human kind" [1].  Other theories have suggested that Akhenaten had a physique changing illness, such as Frölich’s Syndrome (Adiposogenital Dystrophy), which contributed to his feminine appearance.

Akhenaten was considered a ‘heretic’ by subsequent ruling dynasties and there is also uncertainty about events after his death. Evidence indicates that he was originally interred in his royal tomb at Akhetaten (modern day Tell el-Amarna), along with his daughter Meritaten. However, it is possible that after his original burial his mummy was moved to a tomb in the Valley of the Kings in order to protect it from the anti-Atenist backlash. Akhenaten's mummy has never been positively identified, although some scholars have postulated that it could be the mummy found in tomb KV55 in the Valley of the Kings. Others argue that this is very unlikely due to research that has shown it to be that of a man too young to have been Akhenaten. Although inconclusive, it could instead be the mummy of another mysterious figure from the Amarna period, Smenkhkare. A piece of gold foil bearing Smenkhkare's cartouche, which was stolen when the tomb was discovered, has recently resurfaced in Germany and appears to confirm the identity of the coffin’s occupant. The burial seems to have been hastily arranged using a coffin originally intended for a woman. This discovery also raises the question of whether Smenkhare was in fact Akhenaten’s famously beautiful Great Royal Wife, Nefertiti, reborn in male form, following her own succession to the throne.