Cast of a Soskiles Capitoline Amazon 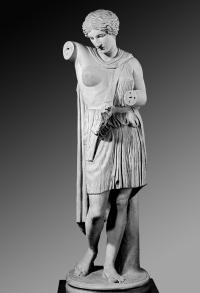 You can visit the downstairs area of the Cast Gallery on Thursdays and Saturdays at 2-2:45pm. Tours are free and no booking is required, but places are limited to 12 on a first come, first served basis. Please note that the room is only accessible by stairs.

The Amazon of Remy de Gourmont

Amazons is a name applied to a semi-mythical tribe of ancient Scythian female warriors, famed for their skill and beauty. Supposedly living in modern Ukraine, they were matriarchal and did not allow men to live within their borders. They fathered children by foreigners and exposed male children, so that their tribe remained only female. A woman did not achieve adulthood until she had killed her first man. Shrines were built throughout Greece to the Amazons and were worshiped particularly by women.

The term has remained popular for female warriors, but has also been applied to and by women who challenge patriarchal societies in some way. It was used pejoratively to refer to Suffragettes and taken up willingly by some branches of feminism. Many smaller groups of women and individuals have also used the term – most notably the author Natalie Clifford Barney (1876-1972).

Natalie Barney was an American, who held a famous artistic salon to rival the male-only Académie Française. Referred to even on her tombstone as ‘the Amazon of Remy de Gourmont’, she strongly embraced the term and created a community of like-minded women. Natalie even features in the most well-known lesbian novel of the century, Radclyffe Hall’s The Well of Loneliness, in the guise of Valérie Seymour.

Like Hall herself, many of the women in Barney’s circle played with the nature of feminine presentation, notably her lovers Renée Vivien and Romaine Brooks. As the world in the novel was in the turmoil of the First World War, these Amazonian women found a place in the world to carve out as their own and to set up as they wished. Barney’s poetry, plays, novels and letters often identify her by the epithet of ‘Amazon’ and are unequivocal about her life, nature and preferences.

For information on all of the casts of Amazon statues held in the Ashmolean Museum, please see the Beazley Archive.