$50 US banknote countermarked with the words 'Lesbian Money' 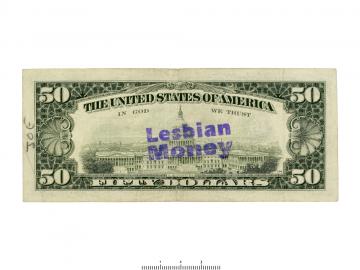 Stamp Each Piece in Purple: ‘Lesbian Money’ and a Politics of (Ex)change

The US gay and lesbian rights movements evolved throughout the late 1960s towards the end of the 20th century. It was a complex and sprawling movement, which adopted many surprising and covert strategies of political protest and civil disobedience. One particularly cunning method of activism was to stamp dollar bills with the slogans: ‘gay money’, ‘lesbian money’ and ‘queer $$$’. The subsequent circulation of the banknotes across America draws on a long tradition of currency being defaced with political messages. Similar tactics of civil disobedience, for example, were adopted by women’s suffrage movements in Britain in the early 1900s; coins were embossed with the slogan, ‘Votes for Women’ and circulated as small change [1] . The defacement of currency was, and still is, illegal and in this sense the stamping of the notes and coins constitutes a significant dissident act in its own right. Yet the political effectiveness, and profundity, of this particular tactic lies as much in its social and symbolic resonances as its illegality.

In particular, the banknotes stamped with the emblem ‘Lesbian Money’ – such as the $50 banknote currently on display in the Money Gallery of the Ashmolean Museum in Oxford – open up insights into a long-silenced part of the US lesbian rights campaigns and enable a refreshing perspective on the economic existence of gay (American) women. The consumerist presence of gay men and women, certainly towards the latter half of the 20th century, was arguably a substantial one. At this time, dual-income and childless households shaped the prevailing public/economic perception of the domestic lives of same-sex relationships. The direct consumerist targeting of this demographic – more generally by popular advertising organisations – is the phenomenon commonly known, in the UK, as ‘the Pink Pound’ and, in the US, as ‘the Dorothy Dollar’ [2]. Yet the ‘lesbian money’ banknotes complicate this conception. Whilst announcing the presence of lesbian identities, the notes also subtly call attention to the sustained economic disenfranchisement, and consumerist exploitation, of gay women – and particularly gay women of colour [3].

Herein, however, the notes’ political message is ironic: queer women are able to generate visibility only in the consumerist terms by which they are persistently de-valued and undermined. In this way, it is possible to argue that these notes suggest how the social materialisation of lesbian women is facilitated by their economic materialisation. In turn, this paradox of economic/social empowerment and disempowerment is interestingly reflected in the symbology of the defaced notes. The stamping of the term ‘lesbian’ – perverse, recalcitrant, queer – across the image of the Capitol Building, the historical and political crux of American patriarchy, is very politically profound; it graphically unsettles a deeply entrenched gender power dynamic. Again, it is possible to trace an historical connection here between this compelling feminist image to the Suffragette Pennies, whose slogans were unapologetically emblazed across the profile of King Edward VII [4].

The political astuteness of the defaced notes and coins lies in how they recall, and fully utilise, the ubiquity of money. The history of money, as object, is one of touch and exchange, as notes are rapidly passed from hand to hand, and travel from place to place. It is a tangible and physical process of communication between people that, in this instance, has enabled lesbian voices to effectively gain entry into public spaces and everyday discourses. The ‘lesbian money’ banknotes, in this sense, foster unanticipated and intriguing encounters with the dissenting individual who stamped her money in purple – a colour broadly associated with 20th century women’s liberation movements – and the marginalised community of which she is a part. Money is an object dominantly defined by its connection to, and facilitation of, mainstream, hetero-normative discourses and interactions. And the act of stamping a ‘queer’ name and identity across a banknote enables an infiltration of those discourses – in a way that can, perhaps, allow for their subversion, break down and transformation.

N.B. The existence of the banknotes is a little known, under-researched, yet rich part of lesbian and gay liberation movements that demands further scholarly, and popular, attention. I have included a small list of academic texts and a link to a contemporary newspaper article that helped to inform this blog post, yet it is a list that has much scope for extension.

[1] More information is available on the historical and political background of these ‘Suffragette Pennies’ from the British Museum’s website.

[2] The ‘pink’ of the ‘Pink Pound’ refers to the ‘pink triangle’ symbol which was used by Nazi-organised concentration camps to identify and classify incarcerated homosexual men. The ‘Dorothy’ of the ‘Dorothy Dollar’ has a considerably less harrowing history, deriving its name from the popular stereotype that gay men have a particular penchant for Judy Garland.

[3] See Alexandra Chasin’s (2001) book-length study of the economic manipulation, exploitation and investments of the US consumer market in the lives and identities of gay men and, in particular, women, Selling Out: The Gay and Lesbian Movement Goes to Market. Houndmills, Basingstoke: Palgrave Macmillan.

[4] This is a connection, however indirect, which intersects across nations and political generations. It is worth noting that the lesbian rights movements in the US merged, in part, with the concurrent Women’s Liberation and feminist campaigns, which themselves had their nascence in the 19th and 20th centuries women’s suffrage campaigns, both in the US and UK.

Chasin, A. 2001. Selling Out: The Gay and Lesbian Movement Goes to Market. Palgrave Macmillan: Houndmills, Basingstoke.