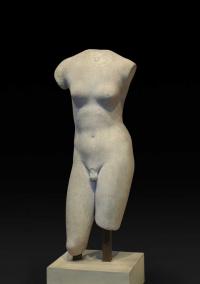 Hermaphroditus is largely remembered as a tragic figure in European culture. This ancient Greek deity is best known from the Roman poet Ovid’s work, Metamorphoses, as the handsome male protagonist of a story with a female water nymph called Salmacis. Hermaphroditus was the child of Hermes, the messenger of the gods, and Aphrodite, the goddess of beauty, sexuality and love, and was also considered a god of love and fertility in ancient Greece. This deity holds an important place in our history as the origin of the word hermaphrodite, though we now consider this an archaic, inaccurate term, suitable for botany and zoology, but no longer acceptable to describe intersex people.  The quantity of sculptures found in Roman and Greek art, like this example in the Ashmolean, shows that there was a great deal of Classical interest in Hermaphroditus too. However, a change in the social status and sex of this deity over time can be seen in the many examples of Classical, Hellenistic and Roman art. I believe that Greco-Roman myths, like that of Hermaphroditus, have led to a misunderstanding of the biology of intersex people and contributed to discrimination lasting even to the present day.

Ovid tells us that when Salmacis fell in love with Hermaphroditus, she begged the gods to join them together and subsequently he became both male and female whilst bathing in her pool. Hermaphroditus and his female form, Hermaphrodite, were therefore depicted in ancient Greek and Roman sculptures with both breasts and a penis [1].  These intersex characteristics were revered as divine in some ancient Greek territories and portrayed in what are known as Anasyromenos statues (meaning the gesture of lifting up the skirt or kilt), with the figures exposing their genitalia. For the ancient Greeks, these depictions were considered apotropaic (good for scaring away evil influences) and good luck symbols. In some places, like Cyprus, Hermaphroditus was also worshipped in another form called Aphroditus [2],  an androgynous version of Aphrodite, a goddess with a female body as well as a penis. Aphroditus’ cult was linked to the moon, and one of union and marriage.

Intersex deities, like Hermaphroditus and the goddesses Agdistis and Cybele, were imported from ancient Greece into the Roman Empire at a time of desperation during the Second Punic War (218-201 BC) [3].  They were popular after Rome’s victory, with Cybele becoming absorbed into the Romans’ Magna Mater (‘Great Mother’) goddess, for example. She was portrayed wearing a mural crown representing the city and as the Protectoress of Rome with Hermaphroditus alongside her. However, despite this, Rome gradually began to question the Greek culture that inspired it so much, and even to consider Greek culture and men effeminate. The writer Varro (Sat 311) described them as "long haired, smooth chinned gown trailers". The androgyny of Hermaphroditus and intersex people was then identified as a foreign disorder [4].  Intersexuality was seen as a danger that could infect Roman babies and men with the disease of femininity, and androgyny was used as a visual symbol of their enemies to the East. Rome came to view Greece with extreme ambivalence. Customs, fashion and even food were at one and the same time adopted and despised.  At the other extreme, for example, Pliny the Elder (7.34) tells us that intersex people were considered marvels and “deliciae” (‘objects of delight’) during the reigns of Pompey (106-48 BC) and Claudius (10 BC-54 AD).

Like Hermaphroditus, trans and intersex people are unfortunately still often disqualified in areas of society. Two examples include Dr Jay Hayes Light, a national level fencing athlete, and Caster Semenya, a South African middle-distance runner and 2016 Olympic gold medallist, who both suffered prejudice and exclusion in competitions. Thankfully, this is now being challenged by organisations like Intersex UK and the UK Intersex Association, as well as by individuals like Sarah Graham, whose 2015 Independent article details their experience.  Many countries around the world have recently recognised and protected intersex people’s rights, like Australia, New Zealand, Denmark and Malta, whilst in December 2016 New York became the first US state to issue an intersex birth certificate to an intersex person.

Rome’s love/hate affair with Greece was reflected in evolving myths of Hermaphroditus, and also impacted on the Empire’s acceptance of trans and intersex people. Until biology is more important in our society than mythology, intersex people and the abuses against them remain the elephant in the room. In 1850, intersex artefacts, including Hermaphroditus sculptures, were banned from display in one UK museum and deemed "not fit for public viewing". However, many other museums across Europe, including the Ashmolean, do display theirs and The Mask of Hermaphroditus, a signature art work of mine, was worn during the launch events for Out in Oxford. Premiered at the Museum of Classical Archaeology at the University of Cambridge in 2015, the mask is directly inspired by Ovid's depiction of Hermaphroditus and Sleeping Hermaphroditus sculptures. Ultimately, however, the inspiration behind this mask is the denial and abuse of intersex people in modern society. My art reveals the presence of a grey scale of sexes and genders recognised in mythology and in the ancient medical text, the Hippocratic Corpus [5].  The Mask of Hermaphroditus is the conduit between the past and the present, drawing attention to the need for equal human rights for intersex people and a Spectrum of Gender Renaissance awakening from institutionalised hibernation.

[1] Examples of the famous Sleeping Hermaphroditus are displayed in the Louvre, National Museum of Rome, Vatican Museums and Hermitage Museum, amongst others.

[4] Interestingly, the philosopher Theophrastus, most notably in his seminal work The Characters (XVI, The Superstitious Man xxviii), records (in a comic way) the amount of water used in the crowning of intersex gods in ancient Greece. This heavy use of water may have inspired the Romans’ aversion to ‘foreign waters’, which they thought might feminise men and cause androgyny, like Salmacis’ pool had changed Hermaphroditus. The later ancient Greek historian Diodorus Siculus (IV.5) tells us that society had become divided on Hermaphroditus being one of two extremes, a god or a monster. There is even documentary evidence of intersex children being drowned as they had been identified as supernatural omens (Pliny, Nat. 5.42, 6.1, 31.5; Herodian, 1.11; Ovid Fausti 4:364).

[5] A semi-religious collection of ancient Greek medical texts associated with the physician Hippocrates, sometimes considered the father of modern medicine.