Statue of King James VI and I 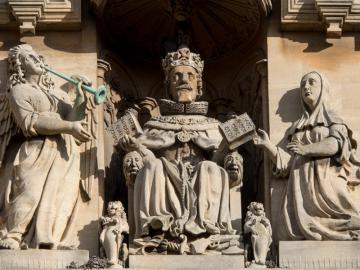 James I of England and Ireland (and VI of Scotland [1566-1625]) is perhaps the most well-known member of the British royal family to have pursued relationships with both sexes. While originally very taken with his bride, Anne of Denmark (Anna in Danish), he soon tired of her and, although they retained a long affection, he turned to other lovers. James was particularly known for his fondness for men and had three significant romances of that nature in his life; Esmé Stewart (1542-1583), Robert Carr (c. 1587-1645) and George Villiers (1592-1628).

What is particularly interesting about James is the apparent openness of his relationships. His great-great-uncle, Henry VIII (1491-1547), had introduced ‘buggery’ laws, so that men were hanged without members of the clergy being present, which made the punishment more severe than murder. Henry’s Catholic cousin, James’ mother, Queen Mary I (1516-1558), commonly known as Bloody Mary, then repealed these laws, which had been used to water down the power of the Church. Still, despite the legality of James’ relationships, they were not well thought of. The rumour went around that “rex fuit Elizabeth, nunc est regina Jacobus” – Elizabeth I (1533-1603), James’ predecessor, was a king, now James is a queen [1].

There are many accounts of James’ actions towards his favourites. One observer commented that, “in the open sight of the people oftentimes he will clasp [Stewart] about the neck with his arms and kiss him” [2].  Phenomenal caches of letters reflecting their close relationship also survive.

While many, even nowadays, struggle to explain their relationships with the hetero-normative language common in love, this was even more true of Tudor England. This is particularly apparent in the correspondence between James and his last major lover, George Villiers. Villiers, granted the tile of Earl of Buckingham, was several years James’ junior. In their personal letters, James interchangeably refers to Villiers both as his son and his wife. However, this gendered language is not only used of Villiers, as James says of himself, “I desire only to live in this world for your sake, and that I had rather live banished in any part of the earth with you than live a sorrowful widow's life without you.”[3]  In return, while away, Villiers laments that, “never none longed more to be in the arms of his mistress” and that his thoughts “are bent on having my dear dad and master’s legs soon in my arms.”

It is interesting that there are notable age gaps between each of these men and James. Stewart was 24 years the King’s senior, whereas Carr and Villiers were 21 and 26 years his juniors, respectively. While historically this probably partly relates to influence and social standing in Tudor England, larger age gaps are still very common in the queer community. Although this sometimes relates to preference, many LGBTQ+ people feel that, among such a small community, personalities rather than age are much more important.

While there is some debate over whether or not James’ relationships with his three favourites were homosexual, they were at least very loving male-male relationships. All three men deeply affected both James’ life and, due to his rank, the governance and history of the UK.