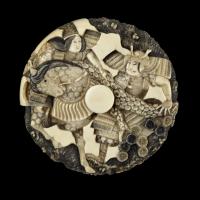 Many plays and stories that are popular from the Heian period (794-1185) onwards in Japan deal with the concept of gender as performative or changeable – decided by gendered actions rather than biological sex. This can be seen on a very basic level by the Pitt Rivers’ large collection of masks used in Nō (能) theatre, where men perform all genders. The Ashmolean similarly has a netsuke (根付), a carved toggle used to attach purses to traditional Japanese dress, which shows the popular semi-historical ‘warrior-woman’ (Onna-bugeisha, 女武芸者) Tomoe Gozen (巴 御前), as well as a 19th century print of another Onna-bugeisha, Hangaku Gozen (坂額御前) [1].

Stories of both Tomoe and Hangaku, who lived in the 12th and 13th centuries, are common. They are portrayed as the paragon of both masculine and feminine, being “fearless as a man and beautiful as a flower”. This idea of being ideal, irrespective, or in spite of, gender, is also reflected in the term Bishōnen (美少年). The term means a ‘beautiful youth’, but historically carries homosocial and homoerotic tones, allowing a non-traditional outlet for gender relations.

Although Bishōnen is more commonly applied to men, it describes a female in Torikaebaya Monogatari (とりかへばや物語); a female living as a man. The title means ‘If only I could exchange them! story’ and tells of two siblings who better fit the opposite gender (the English translation in the Bodleian Library is titled: ‘The Changelings’). In the story, a tengu (天狗), or spirit, curses two siblings to be discontent with their biological sex, essentially ‘gender dysphoria’. They are raised as a male-woman and a female-man, and so pass to adulthood and the court as such. It is an erotic story, and much focuses on the female courtier’s (Chūnagon, 中納言) dalliances with women. 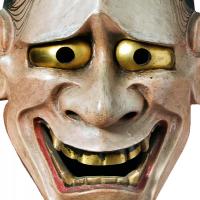 Other tales of Heian literature deal with male same-sex relationships (nanshoku, 男色) and the interchangeability of gender. In ‘The Tale of Genji’ (Genji monogatari, 源氏物語), spurned by a sister, Genji instead takes her pretty brother. In the existing diaries of contemporary aristocrats, Ōe Tadafusa, Fujiwara Yorinaga and Fujiwara Kanezane, it is clear that these relationships were not just in literature.

This gender variance is also seen in Nō (能) and Kabuki (歌舞伎) theatre, as women were forbidden from acting, as in Shakespeare’s Elizabethan England. One very famous Onnagata (女形), woman-playing male, said one could only do it well if they “lived as a woman in ordinary life”. Such actors, living as women, were deeply admired and attracted lovers of both sexes.

The prevalence of any-gendered lovers remained in Japan until the 18th century, when increased contact with Christian Europe led to a decrying of homosexuality and the beginning of an oppressive two centuries for Japanese LGBTQ+ people.

[1] This print can be seen on request in the Eastern Art Study Room.