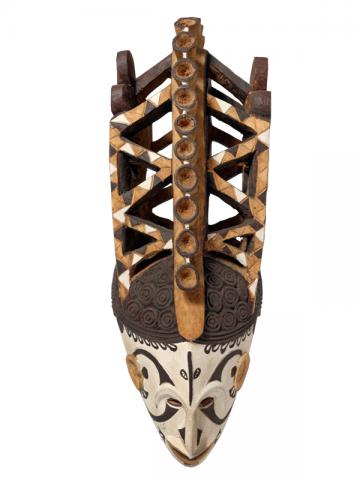 This is a painted ‘maiden mask’ or ‘maiden spirit mask’ from the Nri Awka region of Igboland in south east Nigeria. The best known and most widely distributed examples are those from the north central region that represent ‘maiden spirits’. These are typically worn during agricultural festivals (usually held during the dry season) and the funerals of prominent members of society. Sometimes referred to as Agbogho Mmanwu or Agbogho Mmuo these masks are carved depicting petite feminine features and painted with a white chalk substance to give them a pale complexion and a spiritual quality. On occasion, maiden spirits are invoked alongside other spirits as escorts of the highly respected dead into the spirit world. During agricultural or other ceremonies, however, maiden spirits appear to aid in watching over the living and to promote abundant harvests, fertility and general prosperity. Maiden spirits are light-hearted in contrast to more menacing spirits of the Igbo world, which often generate a more serious atmosphere. Maiden mask wearers perform almost theatrically, as if in a play, their purpose to entertain both human and spirit audiences.

The ‘fame of the maiden’ masquerade embodies the Igbo ideal of beauty based on both physical and moral dimensions. An ideal girl should be tall and slender, with a long neck, full and pointed breasts, a light complexion and small features, her hair elaborately dressed (preferably in the crested style) and her features brought out by facial tattoos. These observable qualities mirror the spiritual traits desired by Igbo males - purity, as defined by the paleness of her complexion, grace in the form of her facial features and the manner in which the spirit is danced, obedience, good character and generosity. In addition, the crested hairstyle, which is often considered a sign of wealth or royalty, is a symbol of the young Igbo maiden as the source of bride-wealth for her family upon her marriage. Such physical and moral ideals are often not matched in reality, however, and are not necessarily meant to be, as the maiden spirits are transcendent, connecting Igbo desires of beauty and the spiritual awesomeness of the incarnate dead.

Maiden mask artists favour red, orange, yellow and black pigments to highlight their carvings, and these can be seen setting off the white of the face on the mask. As in a number of the more elaborate masks, which can have anywhere from one to three hair crests, this maiden has multiple crests dramatically pairing positive and negative space.

The white maiden masks, all worn by men, have super structures of several types, indicating spirit characters of different ages. The character of the eldest daughter, called Headload because of her mask's large figured superstructure, leads the others. Her younger sisters, following, have elaborate crested hairstyles and small pointed breasts. All wear bright polychrome appliqué cloth body suits patterned to resemble the monochromatic designs painted on youthful females. Other characters portrayed during masquerades are a mother, a father, sometimes an irresponsible son and a suitor costumed as a titled elder, whose amorous, often bawdy, advances to one or more ‘girls’ are invariably rebuffed. The play unfolds predictably, with the maidens' dances becoming ever faster and more virtuosic as the mask wearers compete with one another for audience approval and even financial reward.