The Duchess of Botany: Mary Somerset, Jacob Bobart, and the Formation of the Oxford Botanic Garden

The Duchess of Botany: Mary Somerset, Jacob Bobart, and the Formation of the Oxford Botanic Garden 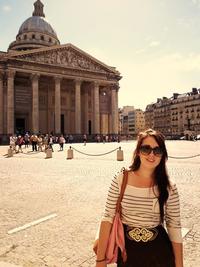 India completed her BA in English Literature at Cardiff University in 2016, and gained her MSt in English Literature (1700-1830) from Oxford University in 2018. Her thesis examined the works of Keats, and argued that his pervasive use of floral imagery was not only indicative of his medical studies (which included botany and hands-on training in the Chelsea Physic Garden) but of the melancholic association he drew between flowers and mortality. Prior to joining the CDP cohort, India worked in academic publishing.

India’s CDP doctorial project is a collaboration between Queen Mary University of London and Oxford Botanic Garden. The project will examine the legacies of — and connections between — two important but under-researched seventeenth-century botanists: Mary Somerset, Duchess of Beaufort (1630-1715) and Jacob Bobart the younger (1641-1719). The Duchess pursued botany at her gardens in London and at her stately home, Badminton. Bobart was the second superintendent of the Oxford Botanic Garden, and was crucial in its formation and on-going success. As part of a wider network of contemporary botanists, Bobart and the Duchess regularly corresponded and often sent each other seeds and plant samples. Through a revaluation of what these epistolary networks tell us alongside a consideration of the impact of gender and class on their botanic endeavours, this project will offer a new perspective on the legacies of the Duchess, Bobart, and the Oxford Botanic Garden.

Additionally, this research will situate botanic collections in their colonial contexts, and consequently begin to consider the implications of colonialism on our understanding of the history of botany. In doing so, the project will demonstrate that correspondence, herbaria, and other botanic miscellanea are exceptionally meaningful in their ability to offer a timely and crucial historical insight.